Construction Workers Rescue a Raccoon From Turning To Stone In Concrete 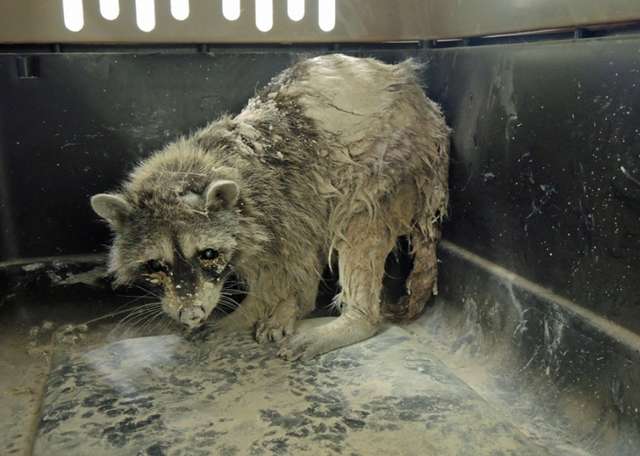 A few construction workers were working on a cement plant located in Arizona last week when their work was suddenly interrupted by something rather unexpected. They had to stop their work after they saw a piece of fur sticking out one of the vats of the cement that was drying.

As it happened to be, an unfortunate animal had somehow fallen in this gray slab of cement in the night and due to the heavy mixture mixing with his fur, it made it hard for him to escape from it. The worker soon found this trapped animal to be a raccoon which seemed really old.

But what surprised them was this raccoon was actually alive.

In order to save the raccoon’s life, the worker immediately placed down a plank of wood into this cemented hole for the raccoon to grab hold of it. Sensing the intent of the workers, raccoon slowly but surely was able to climb up on this plank. She slowly walked until she reached the top of the cement vat but then slipped and fell right back in.

Her fur clearly seemed to be turning into hard rock stone but the raccoon was not willing to give up.

Once more, the raccoon crawled on top of this wooden plank and finally was able to get out of the vat. After that, she simply fell on the ground and curled up into a ball. Being coated in cement from head to toe, the raccoon was clearly weak and exhausted. To help the poor animal, the worker immediately called for the SWCC (Southwest Wildlife Conservation Center).

One of the workers posted on the rescue shelter’s Facebook page, “it seems that harder this raccoon tired to free herself from the hole filled with cement, further she sank into it. The temperatures in the evening were cold and the cement started to set up. This caused her to lose her body heat and it is just a miracle that she even survived this horrific condition.”

The workers at the shelter had the problem to figure out as to how to free this raccoon from concrete?

Director of SWCC named Linda Searles said, “If any of you ever had concrete on your hand you might know as to how hard it is to remove it.”

To remove the concrete they first sedated the raccoon and brought her body temperature back to normal by covering her in warming blankets but the heat started to cause the cement to dry up even quicker.

In order to save the raccoon, they quickly brought many electric razors and started to shear off the fur from the raccoon. The dry cement in the fur caused the blades of the razors to dull quickly and were changed again and again.

After one hour of the hard shearing, the raccoon was left with no cement as well as no fur on its body.

The workers then soaked the raccoon in vinegar water first then placed it in an oatmeal bath. This allowed the pinkish hew of the raccoon’s skin to come back.

Now a week has been passed since the raccoon’s rescue and she is surprisingly doing well.

Searles said, “She is an old raccoon how has lost most of her teeth. She will be examined by the doctors after she grows her hairs back and put on some weight.

After this, the doctor will give the permission as to if it is safe to release her back into the wild or not.

Yuki; The Wolfdog Dumped By Owner At A Kill Shelter, Luckily This Sanctuary Saved Him

Animals that will make you reconsider your view of evolution

Mistakes Every Cat Owner Should Avoid