HomeAnimalsPeople Stop The Traffic So An Enormous Anaconda Can Safely Cross The...
AnimalsNatureRescueSafetyVideo 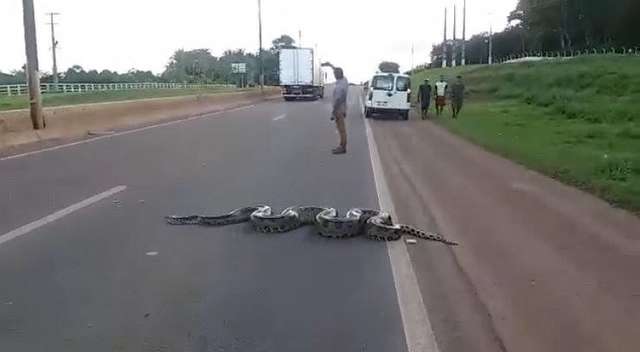 Three days ago a man named Italo Nascimento Fernandes and his wife were going to their home and were on the road in Brazil when they had to stop for something really unexpected.

On the side of the highway and in front of them, an extremely huge snake was on the road. The huge snake, which was an enormous anaconda, in fact, was trying to cross the busy road.

As for Fernandes, he knew that he needs to do something to help the poor creature.

Fernandes told the media, “We decided to stop our car and get out in order to help the snake. There was no sign that the cars would stop so it could cross the road. I have seen plenty of snakes being run over on the roads and always thought of it to be a huge crime.”

Deciding upon helping the snake, Italo Nascimento Fernandes started to signal the oncoming cars on the road to stop. Soon he was not alone.

He said, “Many people then started to gather and helped to stop the traffic.”

Below is the video as the giant snake was helped by the good people as he crosses the road to safety.

Italo Nascimento Fernandes said, “There are not many people like that anymore who will save a snake like this. Some people often prefer to see these snakes dead rather than alive. Seeing all of the people helping the poor creature, gave me a wonderful sensation.”

Thanks to the combined help of the people, the snake crossed the road to safety on the other side.

Below is another video of the snake crossing the road and vanishing into the thick bush by the side of the road.

Italo Nascimento Fernandes said, “It went into the woods and disappeared. It was so beautiful.”

A biologist named Flavio Terassini watching the video estimated the snake to be 10 years old. She is grateful for all the people who helped the snake because the highway deaths of such snakes is a common occurrence in Brazil.

Video of a Woman Suspected of Dumping Puppies in Coachella

Stray Dog found Cold, Shivering and in Pain has a happy ending

Woman Finishes Marathon Carrying Puppy She Rescued Along The Way

Animals That Made Us Ask, “What on Earth Are You?”

These animal photos were clearly taken at the right time