HomeAnimalsLost Family Dog Was Living On Streets As A Stray Finally Found...
AnimalsfamilyLoveRescueVideo 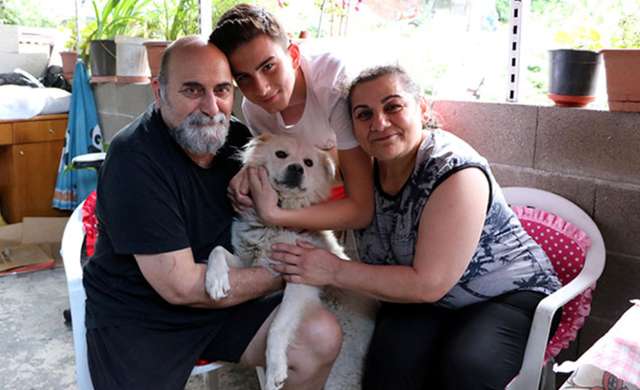 2 months ago a sweet family pup named Leo went missing from his loving home in Turkey. Following his absence, his family was devastated and spent no effort in searching for him but all of it was to no avail.

However, all of that changed one day.

Earlier last week, Sertaç Araç, the son of Leo’s owner was traveling to a neighboring town which was 60 miles away from their house for some work when his eyes caught a look of something very familiar to him. This was a dog that had a striking resemblance to the missing dog of his parents.

This dog, which seemed to be a stray at first, was sitting in front of a café and looked to be completely scared and confused about the life on streets.

Sertaç Araç said, “I immediately took a picture and sent it to my father and mother back home as I was still in doubt.”

Seeing the picture, Sertaç Araç’s parents decided to come to the place and look for themselves the seemingly stray dog if it was there dog or not.

Below is the video when the parents of Sertaç Araç came to the area where the dog was and the rest of the scene can clear doubts of the dog’s ownership to anyone much less the real owners.

Seeing his family, Leo instantly recognized them and was immensely happy to see his family after being missing for several months.

Araç said, “When he saw us, he was overjoyed and we were happy as well.”

The lost dog was finally heading back to his home.

The return of Leo is not only a happy one but also a hopeful one. After Leo went missing, two other dogs in the same community went missing as well.  This led to suspicion of a dognapper but with Leo being found back, there is hope that the other two will also be found one day.

Cat With EDS (Ehlers-Danlos Syndrome) Finds A Forever Home, And Is Now Living A Happy Life

People Find A Stray Tiny Puppy Inside A Dumpster

Meet Kazou; a Blind Cat Who Sees With His Heart

Vets Saved The Life of A Pet Dog From Deadly Cancer; Dog’s Owner Thanks The Vets With the $6M Super Bowl Ad