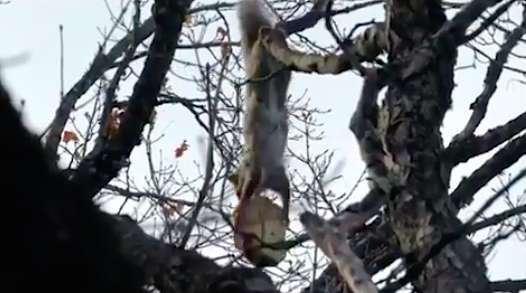 There is a general rule that with enough will, hard work and determination, anyone can achieve their life goals. However, in the case of today, this one determined squirrel got the help from a man who likes to bake bread.

Myron Huntley is a man who lives in the wooded area of Minnesota and his nearest neighbor is almost a mile away from him. He loves to be immersed in and surrounded by nature. He often takes out his camera and records videos and takes photos of birds, animals, and landscapes.

Myron Huntley is also fond of baking bread and this is quite fortunate for a wild squirrel.

Huntley says, “I make my own bread and before it gets stale and hard, I put it out.”

Huntley lately had a quarter loaf of bread which was stale so he naturally put it out. The next thing he put it there, a wild squirrel came out and took it and was last seen dangling with a squirrel on a tree. The squirrel since then had been named as Fat Joe by Huntley.

Huntley said, “After I saw the squirrel come and take the loaf of bread, I ran to my dining room, took out my camera and started recording from the room.”

Fat Joe was dangling on the tree branches with his hind legs while grabbing hold of the bread with occasional nibbles. He was doing as if trying to make the loaf lighter to take it high up above on the tree.

Huntley had seen Fat Joe many times before during his time in the wild but he never saw him this excited.

Huntley said, “I named him Fat Joe because the gray squirrel would always come and chase the red squirrels away from their feeder to steal away their seeds.”

Huntley said, “Fat Joe finally made it back to his home with the bread.”