Dog Convinces Visitor To Play Fetch With Him Through The Door 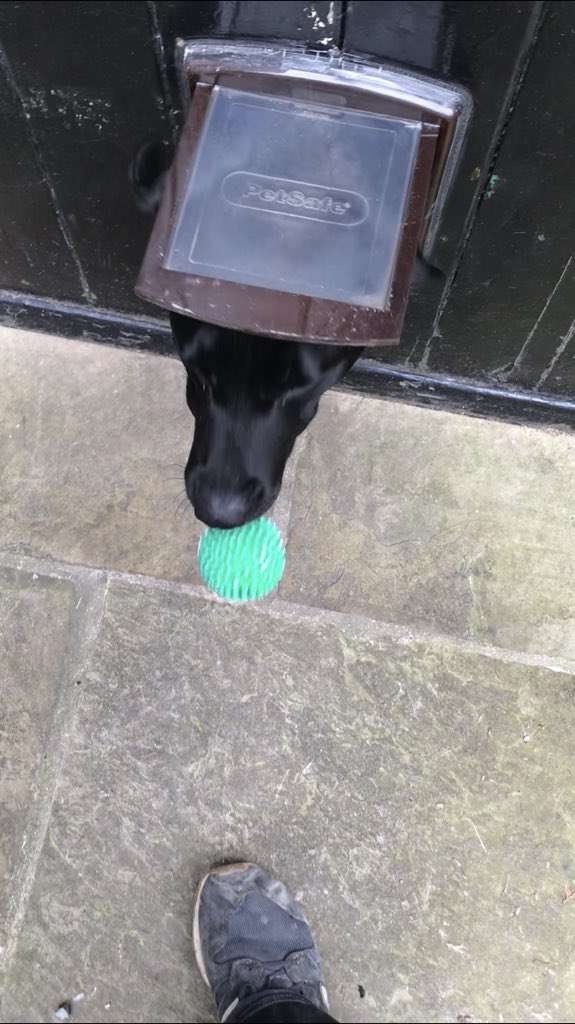 A plumber named James Reynolds was called to a home last week for a routine job in England. However, when James arrived at the home, things took a really different but fun turn.

Reynolds told media, “I knocked on the door several times and there was no answer. Then I suddenly saw the curtain moving from the window.”

To Reynolds’ surprise, he saw the head of a dog popping out of the cat flap located at the base of the door. Reynolds did the same that anyone who would be in this situation would.  However, what he did not know at the time was that he was being roped in a game of pup’s liking and clever design.

Reynolds said, “First I gave him a stroke and he left immediately. But soon he returned back with a ball and dropped it for me.”

As it so happens, the dog has found himself a player for his improve the game of fetch the ball.

Watch the video of this unique play down below.

Reynolds said, “I thought to myself that I would be looking like a weird guy if the customer suddenly open the door and find a guy posting ball through their cat flap. But is did it anyway. To my surprise and amusement, the dog kept on bringing the ball back. At that moment I thought that I need to record this. The world also needs to see this brilliant game of fetch.”

After a few minutes of playing the game with the pup, homeowner finally came to the door. Reynolds to not make thing looks awkward told them and the owner said, “Yeah he does that.”

After getting inside, Reynolds got to meet with his new playmate and also did the job for which he was called for.

Reynolds said, “I wanted to play with him a bit more but I had to finish my work.”

Watch A Lamb Dancing With Vet’s Staff; It Will be The Cutest Thing You’ll See Today

Share
Facebook
Twitter
Pinterest
WhatsApp
Previous articleKirk; the dwarf hamster gets a special gift after he hurt his paw
Next articleLaryssa Giles apartment rules did not allowed her to have a dog so neighbors built a window for her

Pets Who Are Crazy About Their Toy Friends