HomeAnimalsA Sickly Stray Dog Reached Out To Woman For Help And Is...
AnimalsRescueVideo 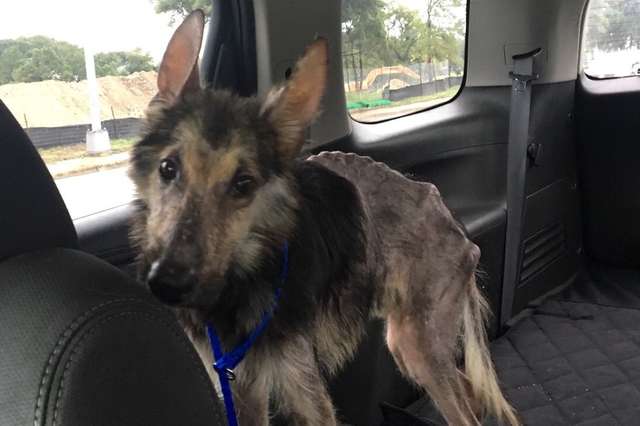 When Caro, a rescued German Sheppard dog, was first spotted by Kylina Turner, she was not aware that she would be such a bundle of cuteness and joy to her.

Turner said, “I thought at the time that she was stuffed animal. He was completely frozen and staring back at me. I walked up to her to check on her and then her ear twitched. I was shocked to realize that it was an animal and a living one at that.”

Caro had his legs stuck in the wire bed frame and was too malnourished and weak to free himself. Caro knew that Turner was his only hope so he let her help him.

Turner was scared to touch the weak dog so she first put a jacket around the 18-pound light dog and then lifted her out of the mangled bed. She then took her to her car where she immediately fell asleep.

Turner, from there, took Caro to a vet and while he was being checked by the vet, Turner fell in love with the 6-month old dog.

The vet told her after checkup that Caro was severely malnourished and dehydrated. He was also suffering from the worst kind of mange that the vet ever saw in his professional life.

Turner was not sure if the dog could make it alive out of the treatment, but she made a habit to keep an eye on Caro. Still, the dog was too weak to even move.

Turner said, “During the one week, when Caro was at vet’s clinic, I went daily to check up on her. Techs at the clinic were always very excited to tell me little things about Caro such as he lifted his head today a little bit or he walked on his own to the other side of the kennel or he ate solid food today on his own. Still, all of it was heartbreaking for me.”

Despite Caro’s poor condition and his inability to interact with the surrounding, Turner watched herself growing more and more attached to the poor sickly dog. That was when; Turner decided that when Caro leaves the vet’s clinic, she will foster him until he regains his full strength and health back.

After taking him home, Turner would give Caro medicated baths for treating his mage and would feed him small meals for times a day.

Soon his thick black and brown fur started to grow back.

With every pound Caro gained, he started to look more and more like a great German Shepherd dog that he was supposed to be.

Now thanks to Tuner, Caro is like a whole new dog.

Now after a few months of being together and Caro being in great health, there is a problem that is not too much for Turner; Caro is now not able to live without her.

Turner has adopted Caro as her own and they could not be happier with each other.

These animal photos will make you look twice and then again

Animal Family Photos That Are Way Cuter Than Yours

Police finds a taped-up dog left on the side of the road; tracks the culprit and arrest him