HomeAnimalsThis dog was so weak everyone thought she’s gonna die but recovers...
AnimalsRescue 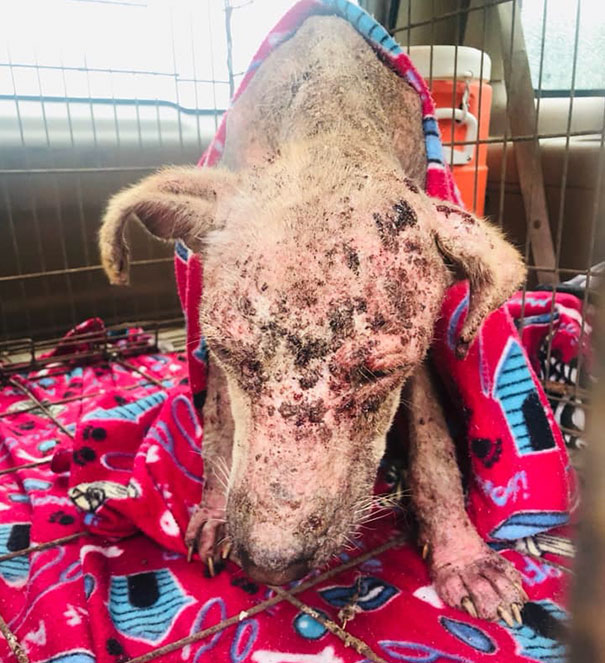 Earlier in November of 2018, a couple noticed a dog roaming through streets of their neighborhood in South Texas. The dog was very weak and severely malnourished and its skin was ravaged by Mange. From the looks of it, the poor pup needed help immediately. The couple did their best to coax the poor dog but it was too scared to be caught.

The dog, which was later named as “Ana”; finally was taken after a week to a vet’s clinic. When treating her, the rescued couple came to know that she was only 2 years old. Due to her health being much worse than expected, even the founder of the Rescue Dogs Rock NYC; Stacey Silverstein, did not raise the hopes of Ana’s rescuer.

The poor girl was in very bad shape when they got her. Her skin and eyes were badly affected and her spirit had been diminished.

With such a terrible health, it was no wonder that Ana was reluctant to help.

Despite all the shaky odds, Ana still clung onto life and soon as able to prove everyone wrong. The dog bounced back from her poor health as if nothing was ever wrong to her. The dog receiving the love and care during her treatment made her forget the apathy from humans very quickly.

After just a few weeks of treatment and love from her foster parents, Ana is looking amazing. Her hair ha comeback in full force and she is happy more than ever she was.

Ana coming out her shell has transformed into a beautiful puppy. With her fur being fully grown back, her rescuers believe that she is a Labrador Retriever mix. She is now a happy friendly dog with not only people of all ages but dogs as well.

Since her treatment, she has been moved from Texas to New York and will be placed for adoption. Rescue Dogs Rock NYC officials are hopeful that it will not be long until Ana finds her forever home.

Morgan, the 18 years old rescued senior Dachshund Dog does everything on his bucket list, and he’s more alive than ever

Abigail the hugging rescued kangaroo hugs her rescuers every day

Boyfriend proposes girlfriend with 16 Dogs and her reaction is Priceless

Injured dog unable to move in front of a moving train, his brave friend came to rescue

Angry Kittens Who Demand To Be Taken Seriously Right Meow

Amazing Dogs With Unique Markings That We Fell In Love With