HomeAnimalsInjured dog unable to move in front of a moving train, his...
AnimalsLoveNatureRescueVideo

Injured dog unable to move in front of a moving train, his brave friend came to rescue 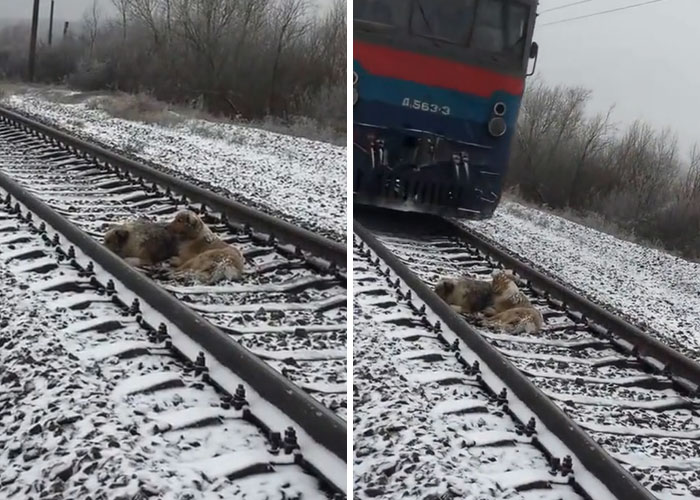 What’s most surprising is that both dogs stayed on the train tracks for almost two days surviving many of the passing trains.

This touching story of friendship among dogs was shared by Denis Malafeyev on Facebook where he wrote,

“When we arrived on the tracks, we saw a female injured and could not move away from the tracks and was just lying there. All this time a healthy dog was trying to rescue her. The male dog when heard the sound of the coming train, came to her and lie down close to her. Both dogs pushed their heads down on the tracks and let the train pass over them.”

Denis Malafeyev said that this story made him emotional, “the male dog had been doing all this for the past two days in a row. When you think about it, he was keeping her warm.”

As the story unraveled, the protective dog’s name was Panda while the female injured dog’s name was Lucy. The man later informed people on Facebook that the two dogs were given proper medical treatment and safely returned back to their owners where they are now safe and sound.

When we arrived on the tracks, we saw a female injured and could not move away from the tracks and was just lying there

Lion was about to lose a fight against 20 hyenas, brother rushes to save him after hears his cries for help

Anna Kendrick poses with different animals; it will make you want to be her friend

Share
Facebook
Twitter
Pinterest
WhatsApp
Previous articleGirl rescued a “newborn kitten” trapped under the floor at her school; Kitten now sees every human as a blessing
Next articleWall-E; The playful Pup Abandoned by his old family at a shelter, looking for a new home

Husky Gets Stuck On Coconut Tree, The Internet Decides To Help…