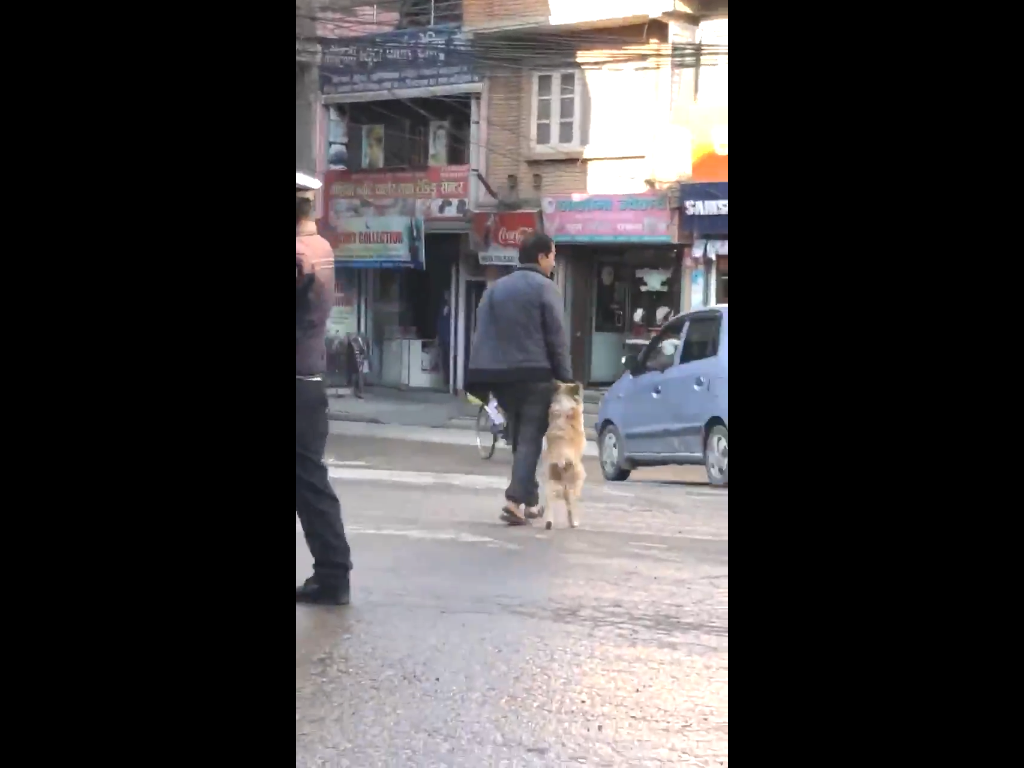 The first lesson that kids are taught is that they must be careful when crossing a street.

It appears that one dog who was caught standing on the side of the road in Kathmandu, Nepal has also taken this lesson to his heart.

The dog was spotted by a woman named Natalie Compton who happened to be in Nepal for taking a hike at the Everest Base Camp.

Compton told media, “It was a few days before my hiking trip was to start and I was spending time in Kathmandu. In order to be prepared for the upcoming hike, I was enrolled at a gym nearby. On that day, I was happened to be sitting outside my gym after n intense workout. The beauty in the streets of Kathmandu is one of the most mesmerizing in the world.”

Soon Compton saw a man and his dog standing nearby a street. As soon as Compton saw the duo, she took out her camera on her journalistic instincts and started recording them both.

Compton said, “Since my arrival here in Nepal, I had seen literally hundreds of cute dogs, some of them were wearing a sweater and they were not only cute but also very friendly. I started recording this dog as I myself am a great dog-loving millennial.”

But what happened next totally amazed her.

Compton said, “Suddenly the dog’s owner summoned a paw of the dog.”

The dog gave his paw in his owner’s hand both of them started walking hand in hand safely across the busy road. She said, “I could not believe as to what I was seeing, even after witnessing them cross the road with my own eyes.”

Each year in Nepal, people celebrate a festival called “Kukur Tihar”. This festival is a dedication of the people for loyalty as well as the friendship of their canine friends.

Despite having traveled the whole world and seeing many amazing things, she posted the video with the caption, The Most Surprising 15 seconds of my life yet.”

Share
Facebook
Twitter
Pinterest
WhatsApp
Previous articleCop saves a dog entangled in sheet; Thanks her rescuer in the sweetest way
Next articleWhile on Vacation Parents Get An Adorable Video from their Son Along With Family Dog

Dog Convinces Visitor To Play Fetch With Him Through The Door