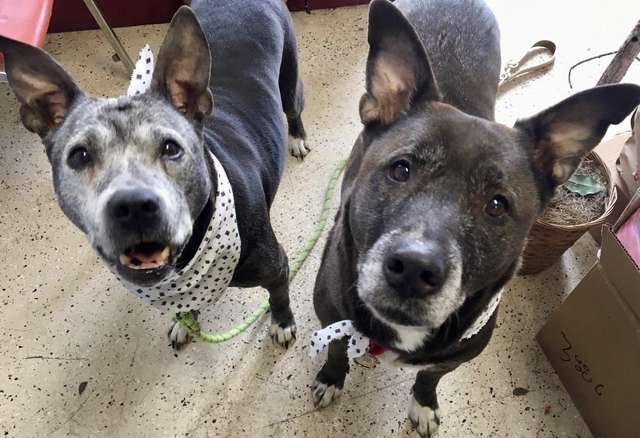 Last week’s Saturday evening, the manager at the Petco store located in Allen Park, Michigan; she could sense that there was something not right about the couple wandering in the store.

The couple wandering in the store also had two dogs. Both of these dogs were not wearing any collars. As a red flag for the manager, the leashes of both the dogs had been mashed together to make a slipknot.

A worker of the Petco named Julia Sly wrote in her Facebook post, “the manager, whose name is Rachel, approached the couple to ask why the dogs did not have their collars. Couple replied they forgot the collars at home and they were there to pick up some things. After that, the couple walked further into the store to where dog food was kept.”

By the time, the store was about to be closed, the couple had been long gone but they left behind a surprise for the workers. Cries of dogs were coming from the store’s bathroom. They opened the bathroom door and found there both dogs standing alone and sacred out of their wits.

Manager called the local rescue center but they already had too many dogs. The store then posted a plea of help on Facebook and the spot was seen by a board member of P.O.E.T Animal Rescue named Carol Lair. After reading he post, she came to help the two dogs.

Lair told the media, “People get tired of these old dogs and they always try to get rid of them.”

When Lair reached the sore next day, the two dogs were traumatized greatly by this whole ordeal. Lair told the media, “They were both very scared. They were both shaking and all the wanted was to be together.”

Lair helped them both in her car where they instantly jumped into her lap and started doing funny things.

Lair even posted a video about letting the world know about these two beautiful dogs, which is down below.

Both dogs have been used for breeding many times which has affected their health. However, these dogs show their rescuers that they have so much to give.

The dogs would be ready for adoption by some time in the next two weeks after they are spayed and vaccinated.

Lair has named these two female dogs as Marigold and Daffodil.

How to Catch a Flying Kite See video.

Horse gets stuck in a swimming pool; a crane was needed to get him out

Yuki; The Wolfdog Dumped By Owner At A Kill Shelter, Luckily This Sanctuary Saved Him

Share
Facebook
Twitter
Pinterest
WhatsApp
Previous articleGorgeous Wolfdogs You Would Want to Hug and Never Let Go
Next articleJason Gasparik; A Man Finds A Lost Dog And Goes Out Of the Way To Reunite It With His Owner

These hilarious photos prove once you get a pet, you’ll never feel sadness again

Flexible Cats Who Broke All the Laws of Physics