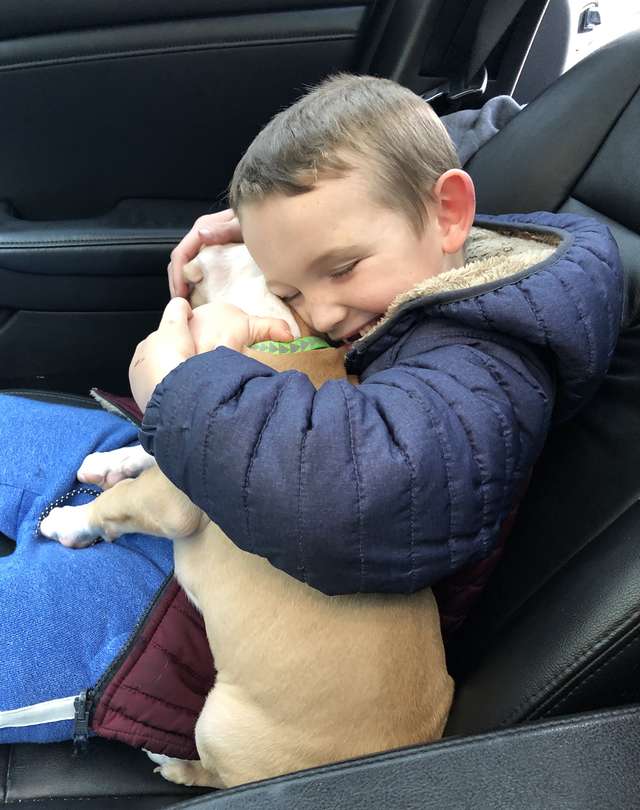 Parents of the 6 years old Leo Downs told their son that they need to step inside the building to donate some supplies.

Little did Leo know that this was actually one of the best surprises of his young life that he will remember for the rest of his life.

This was not any building but was, in fact, the “Stray Rescue of St Louis”.

A few months ago, the Downs family lost their beloved family dog Mellow who naturally died at the age of 13 years old.

When Katie was pregnant with Leo, Mellow remained by her side as a faithful dog to protect her. After Leo was born, he showed the same devotion to his new little brother.

Downs said, “Anywhere Leo went, Mellow was there to protect him. We got Leo a bunk bed and give him the top bunk. Guess who got the lower bed? You guessed it right, it was Mellow.”

Downs after Mellow’s death decided to not have dogs for a while.  As for Leo, he kept asking his mom for another dog.

Slowly Downs started to become warm to the idea of having another dog. They looked at the Stray Rescue of St Louis website for dogs. There, Downs saw a 9 months old pit bull mix dog named Nutty Buddy that made her heart skip a beat.

She said, “His resemblance to our Mellow was uncanny and I showed it to my husband. He quickly said to put in the adoption application for him.”

Once the adoption application was done, it would be a surprise for young Leo.

At the shelter, Leo was standing behind his parents and volunteer came out holding a little puppy and Leo could not believe his eyes.

Luckily for us, the staff of the shelter was recording this heart touching moment.

Now Nutty Buddy is the part of the Downs family.

Leo and Nutty buddy are now best friends and do each and everything from playing to snuggling each other together.

Scottish Dog Insists On Soccer Match With Postman Before His Delivery

Tulip, the cat who won’t stop smiling after he was rescued