HomeAnimalsDogs Suddenly Show Interest In The Football Game As Soon As A...
AnimalsCuteFunnyVideo 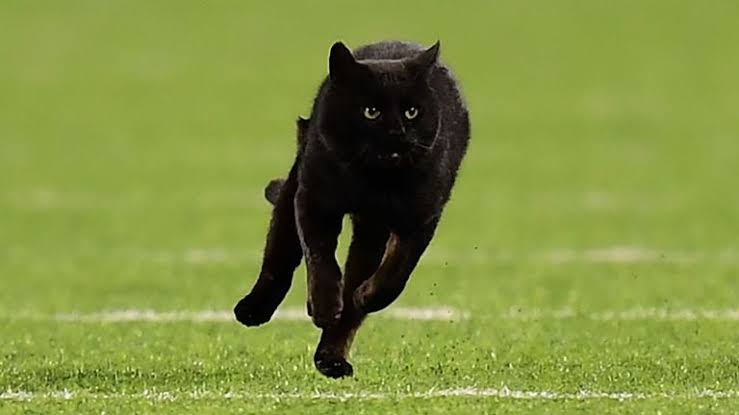 Humans, over the long course of history, have invented sports to free their minds from the boredom of the humdrum life. In the past few centuries, these sports have taken a turn for good as the world is now dominated with uncountable sports and each nation having its own sports teams for various sports.

The love of sports is not limited to human beings as animals also share the love of sports as well. Don’t believe us then you might not have seen the video of the black cat that decided to take part in the NFL game this season between the New York Giants and the Dallas Cowboys. A black cat suddenly got on to the field and then started to storm all across it.  The sudden appearance of an unexpected sports fan caused a delay but the cat did get wild cheers from the delighted crowd.

Well, it was a great scene to behold on a football game. However, it was not the crowd alone at the stadium that notices the cat suddenly coming onto the field.

A woman named Stacey Daley was also watching this game in the comfort of her own house and in the company of her two dogs when the sudden emergence of the feline cussed a delay to the game. As soon as the cat came onto the screen causing the game to halt, Stacey’s 2 dogs, who were not particularly interested in the football game suddenly started showing interest in the game. It seemed as if they too were upset by the delay in the game.

The scene is downright funny to see and Stacey managed to capture the whole scene on camera. Below is the video of that very moment when the cat appeared and the dogs got upset watching it.

We are going on a limb saying that the pups were actually rooting against that black cat that according to stadium officials is still on the loose. The scene turned really funny when the cat got away from the field as it could be seen on the screen. But the pups thought that it was they who made it go away.

Well, while 2 dogs were not happy about the cat stopping the game, somewhere else the situation was quite different. It seems like the act of the Black Cat was heavily applauded by the fellow felines.

See the video down below to judge it yourself.