HomeAll PostsDog Destroys Owner's Passport and stops her from going to Wuhan; Potentially...
All PostsAnimalsSafetyWorldWOW 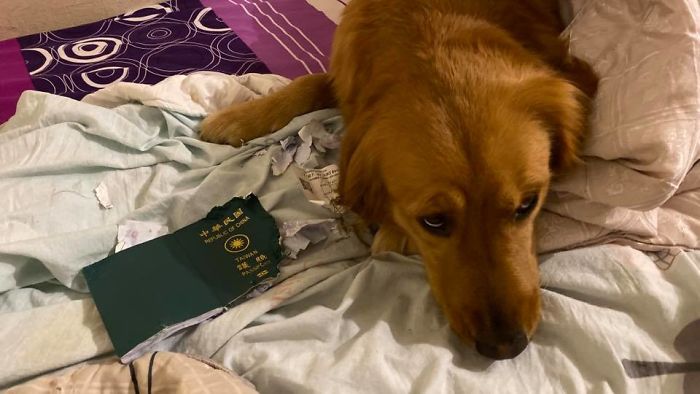 A case happened in Taiwan where a pet Golden Retriever dog named Kim apparently destroyed her owner’s passport just before the owner was taking the flight for Wuhan. At the time, the dog might have been bored or hungry for doing this, but the current situation in China appears to be a blessing in the disguise of this small mischief.

If the city of Wuhan sounds familiar to you, then it might be because of the name being mentioned again and again in China over the last few days. The focus of this news is the recently deadly Coronavirus which is the illness that has rapidly started to spread across China as well as many other countries across the world. The disease has made the global health community really worried.

This is Kim, the Golden Retriever that destroyed her owner’s passport.

The passport got torn which caused Kim’s owner to not take the flight for Wuhan, which is currently the epicenter for the deadly Coronavirus.

This is the picture right after Kim tore the passport and she looks really guilty in it.

The owner of Kim also went on to post the pictures of the torn-up passport. Kim looks really guilty in those pictures. The owner was at first really angry but that was before the virus had started to spread fast.

Kim’s owner wrote on her Facebook account, “Do you guys remember the passport? Throwback: this kid is really protecting me. After my passport was torn apart, the virus began to go where I originally planned to go. I think about it now, and it’s very touching. Fortunately, you blocked our trip.”

These are some other pictures of Kim.

When Kim’s owner was asked how she reacted when she saw the torn passport, she said that she was very at the moment.  But when she saw the news about rapidly spreading Coronavirus in the city of Wuhan for the last few days, she was thinking back to the day when her passport got torn up.

Kim’s owner said, that because of the passport being torn up, she was able to reunite with her family in full health for the Chinese New Year as she managed to avoid the virus.

So far nearly 2000 people have suffered from Coronavirus in China and it is hard to contain this viral infection during its incubation period. So far nearly 56 patients of the virus have died strict rules and travel restrictions have been placed with Wuhan under lockdown.

From Sunday, all of the wildlife sale in China has also been banned because studies show that the virus has originated from animals but the source is still not confirmed.

So far, this virus has spread to countries like Japan, Taiwan, Nepal, United States, Australia, Singapore, Vietnam, and Thailand. Hopefully, this virus can be stopped in its tracks before the time it could become a global pandemic of uncontrolled proportions.

Share
Facebook
Twitter
Pinterest
WhatsApp
Previous articleBlind Elephant Starts Dancing After The Pianist Plays Piano For Comforting Her
Next articleThe Good Dog That Takes The Bus Ride To The Dog Park Everyday On Her Own; Even Has A Bus Pass Attached To Her Collar