HomeAll PostsChubby Bear Gets Stuck In The Dumpster And Needs The Helping Hand...
All PostsAnimalsFunnyRescueVideo 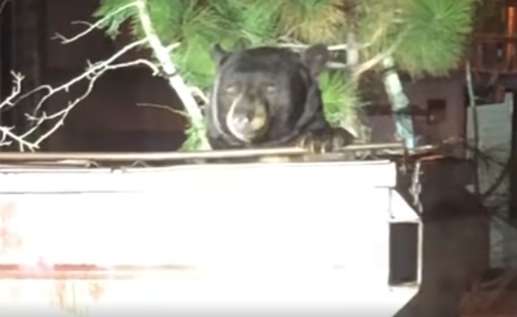 More and more wild animals are starting to leave their natural habitats in search of food and move towards the living places of humans. This food scarcity for the wild animals is occurring due to humans as more and more forests are being deforested. Wild game is being hunted down to case food shortage for the big predators. This is a growing concern in the long list of mistakes that humanity has caused in the last few decades.

Still, not all of these occasions where animals have turned up to human populating areas are bad, they have their own occasional perks like animals doing funny things in the backyards.  The story for today is nothing different. It is about a bear who, in search of food scours the dumpster but then he gets stuck in that very dumpster.

With the winter season in full bloom, many cold-blooded animals are preparing for their winter hibernation but for that, they are also stocking up the food in their body in form of fat to live by comfortably through the winter. However, one bear actually got itself plumped but was still not satisfied when he ravaged a dumpster located somewhere in California.

The food might be a love for this black bear but his oversized body proved to be a source of embarrassment for him and joy for us.

The deputies of the Sheriff office in Placer Country received a distress call to a location last week. When the deputies came to the scene of a call, there was a bear, which since then has been named as T-shirt. The bear had apparently been there for dumpster diving but getting out of the said dumpster proved to be a major problem for it.

It seemed that after T-Shirt got himself inside the dumpster, the lid closed down on him and he was stuck in the dirty dumpster.

Fortunately for this big bear, the deputies came just in time to help the poor fellow.  The video of the rescue of the T-shirt is below.

After being rescued, the T-shirt was seen scampering away in search of perhaps another food source.

He was named T-Shirt because of the big patch of white fur in the middle of his chest area.

Share
Facebook
Twitter
Pinterest
WhatsApp
Previous articleVideo of a Cat saying ‘Well, Hi’ in the Southern Accent HAs People listening to video over and over again
Next articleA Caring Cat Walks Really Slowly For His Best Friend On Crutches To Stay Right Next To Him

The World’s Most Romantic Animals