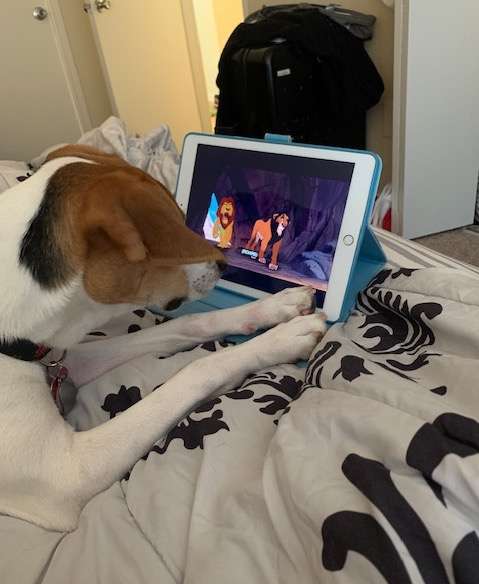 Meet Luna, the dog who is a bit of a couch potato but her owner Alexa Moore loves her the way she is.

She is 9 months old rescued dog that now loves nothing more than simply being snuggled up in the blanket with her parents and then watch a movie. Alexa told media, “We both had our own dogs when growing up but none of them were like Luna. She loves to watch TV with us.”

However, there is still one movie that Luna loves more than the other and it’s the Lion King.

All of it started when Moore suddenly started noticing that there was something peculiar whenever Luna saw the preview of this Disney movie. Whenever a Lon King commercial was aired on TV, she would seem to be really interested in it.  Moore said, I then decided to open the Disney+ app on the TV and then played the movie.  She clearly seemed interested in watching that movie.”

Like the children of all the generations, the pup was immediately captivated by the classic movie for kids. She then pushed her face up against the screen and then watched the movie quietly.  Luna has a sweet and empathic personality, so when she saw that her friend Simba was hurting on one scene of the movie, she too seemed distressed.

This scene was the saddest part of the movie where the Simba finds his dad ‘Mufasa’ to be dead after being trampled by the wildebeest stampede.

Moore said, “Luna reacted in the cutest way possible.  She was following Simba all over the screen and her ears were also moving around.”

Luna then went on to nuzzle and then pawed at the screen for Simba as he was mourning his father. It seemed as if Luna was trying to ease the pain of Simba.

Moore said, “Her reaction was simply great. It shows that all the animals understanding empathy and feelings.  I had always believed that animals were capable of sensing emotions and also react to them in a comforting way.”

Watch in the video below the reaction Luna seeing the sad scene of the movie.

After the movie was over, Moore made sure to hg her pup and give lots of kisses. Moore said, “Whenever I am having a bad day, Luna tries to stay close to me and then she snuggles me more than she usually does.”

Impressive animals that really know how to get in shape