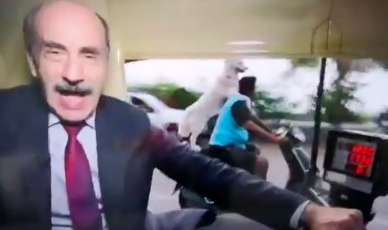 There are two things that anybody loves; one is the pictures that are hilariously photobombed and the second are the funny pictures of the dogs. But when you mix both of these tighter, you get a recipe for insanely funny stuff. Well, our story for animals is much like this when a journalist got photobombed in the most hilarious ay by a dog.

The name of the said journalist is Tom Brook who is from Britain and he was in Mumbai, India where he was filming the episode for his film review program titled “Talking Movies”. It was during that video story making that Brook’s show’s limelight was stole by someone else.

the host or BBC World News was about to sign off while sitting in the backseat of a yellow cab when a huge white fur dog that was riding on a scooter made its appearance in the window behind Brook. This dog was hard to miss in that photobombed picture because of his talent which was using his hind legs to balance itself on a scooter as his paws were placed on his owner’s shoulders.

This is the most Indian photo bomb ? pic.twitter.com/dtAcmByofW

Since getting posted, this video has gone viral with hundreds and thousands of shares and likes. While this was the first real TV appearance for this talented scooter riding dog, the dog itself happens to be a local celebrity of the sorts in the vicinity.

This first video post was responded with another Twitter user who then uploaded a much clearer video of the dog as he cruised through the streets of Mumbai riding on a scooter with its dad. The twitter user wrote in the caption, “I asked the local shopkeeper about that dog ad as it happens to be this dog gets to have daily rides in that same area.”

While the journalist was not able to see that talented dog in his video, the dog is still getting all the attention that he truly deserves.

Man Raises A Wolf Cub after He Rescues It, Now Both Of Them Are Inseparable

Share
Facebook
Twitter
Pinterest
WhatsApp
Previous articleMan Raises A Wolf Cub after He Rescues It, Now Both Of Them Are Inseparable
Next articleAn Old dog died in his owner’s arms from fright following a panic attack triggered by fireworks

Genius Pet Gear for your pet’s