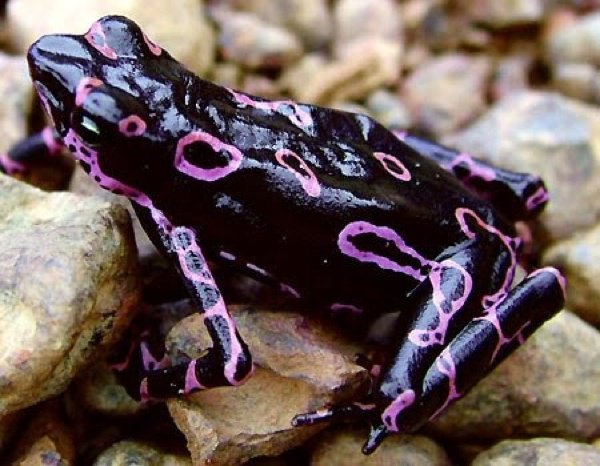 There are nearly more than 4800 species of frogs across the world. These frogs living in different environmental habitats have formed some of the bizarre shapes. Some of these bizarre looking frog species are as follows.

This frog is generally found in rainforests of South America. Brazilian Frog has been given distinct appearance as compared to its other amphibian family. Evolution has resulted in giving this frog specie a leaf like color allowing it to hide it well for both hunting or avoid being hunted.

This frog can grow up to a length of 20 cm. this frog has a very aggressive nature and people from nearby town whilst walking through forest wear long boots to avoid getting bit. Some people also keep them as pets despite their aggressive behavior.

Helen’s Flying Frog is recently discovered species of frog in the forest of South Vietnam. Its specialty is evident from its name as it is able to fly using its huge webbed feet. This frog has flaps of thin skin in between its arms that allow it t glide through forest to avoid predators and females. Its long feet are used to stick to tree branches after the glide. It can reach ten cm in length.

An Australian scientist discovered this frog and named it after her mother’s name.

Variable Harlequin Toad is a species that is found in forests of Costa Rica. In the past few years due to fungus outgrowths and severe climatic changes this one abundant species is now facing threat of extinction.

This toad has coloring of Black, Purple and Yellow that warns its predators about its poisonous nature. The venom indie this toad is 100 times more potent that the Potassium Cyanide. It’s only natural predator is the Parasitic Fly which lays its eggs on legs of toad. The larvae then burrow indie its legs and eat its internal organs from inside and killing it.

Turtle Frog is found in the semi arid areas of the Western Australasia. It has a very peculiar appearance as its looks like a turtle without any shell. It has pinky brown colored body with a tiny head and stubbed limbs. Their limbs are strong enough to dig through sand and break termite mounds which are their food source.

This frog skips its tadpole stage and fully forms inside its egg. Their egg is the largest amongst all frog species in Australia measuring up to 5 to 7 mm in length.

Surinam Toad is found mostly in the tropical forests of Amazon. It can grow up to an amazing length of 20 cm but despite its large body size it has small eyes and an extremely lat body. It attracts the female for mating by making a clicking sound form its throat. The sound is created by striking two of the bones in its throat.

Bahati, The Adorable Lion Cub That Was The Model For Simba In the Lion King remake