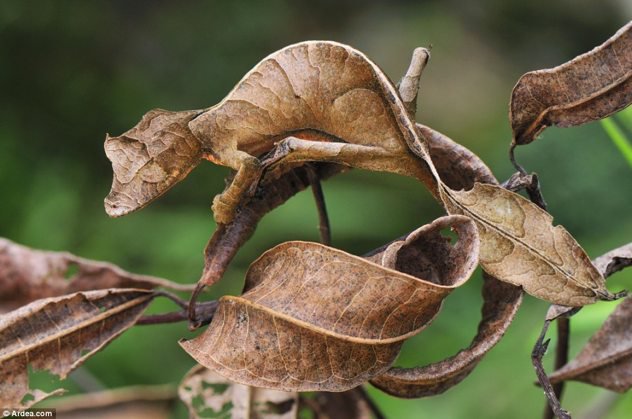 Nature has blessed animal wildlife with many special defense mechanisms that resulted in their natural selection. One of these natural mechanisms is the Camouflage. Some of the amazing animals with this natural camouflage ability are as follows.

Baron Caterpillar is mostly found in India and Southeast Asia. After hatching from their eggs they are only 4 mm in length with small spikes on their body but after 4th or 5th stage of their growth cycle they can grow up to 45 mm in length with spikes getting much larger in size too. These spikes along with caterpillar’s bright green color allow it to camouflage itself as a leaf for both avoiding predation or for hunting prey.

Pygmy Horse has a length of about 27 mm. due to its miniscule size and elaborate camouflage ability, it was only found first back in 1969 and since 2000 only 6 more specimens have been found. They are found and most probably inhabit in the deep waters of Australia, Indonesia, Japan, New Caledonia and Papua New Guinea.

Leaf Sea Dragon is native to the ocean waters of Southern Australia. They have a body length of 35 cm. their bodies are long and slender in shape and are decorated by leaf like appendages. These appendages give them and appearance of an underwater plant and help them camouflage in plain sight. They are closely related to sea horse and are sometimes also called Weedy Sea Dragon.

Dead Leaf Butterfly is found in tropical forests of Asia and mostly in India and Japan. Dead Leaf Butterfly has two generations per year each representing either wet season or dry season. Their wing pattern and color looks just like decomposition of a leaf and they even have holes in them.

Leaf Tailed Gecko is a native to the island of Madagascar and the ones surrounding it. The gecko has 8 leafs surrounding it and they can look either dried up or rotten laves. They are also known for their ability to blend in with tree barks.

Environmental problems that have adverse effects on wildlife

Cute pets that brought presents for their owners