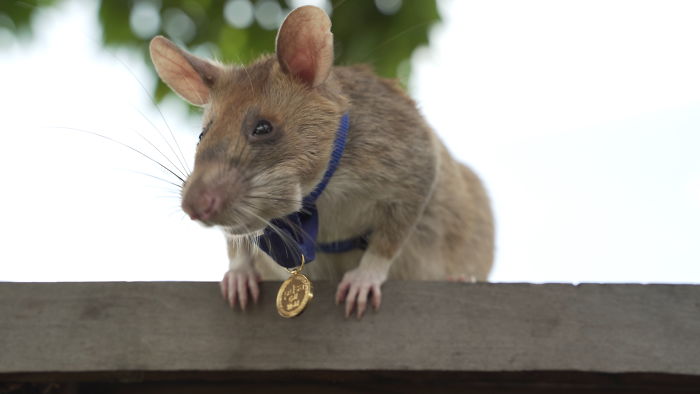 Today we want to introduce you to a rat named Magawa. This is no ordinary rat as it has been awarded the PDSA Gold Medal for its bravery and its devotion towards the duty of being a landmine detecting rat. This award was bestowed upon Magawa by the People’s Dispensary for Sick Animals and is equivalent to that of a George Cross.

Magawa is the first-ever rat in the history of Veterinary Charity for the last 77 years to have received the PDSA Medal. With this award, Magawa has joined the ranks of the many brave horses, courageous dogs, intrepid cats, and valorous pigeons.

Magawa is serving currently in Cambodia and is in fact a giant pouched African rat. He has been trained by a charity named APOPO for detecting landmines and is by far the charity’s most successful rodent in that regard.

He has helped the people of Cambodia to have over 141000 square meters of the land for locals to travel on. Magawa is the embodiment of the phrase that even someone so little can change many lives.

Magawa was awarded the miniature version of the PDSA Gold Medal by the veterinary charity’s General Director Jan McLoughlin on 25th September 2020.

This is Magawa; a large pouched African rat who has been presented officially with the PDSA Gold Medal for his courage and bravery.

This is Magawa wearing his Gold Medal proudly.

Here, Magawa is posing along with his human caretaker and colleague named Malen.

Look at this proud rodent.

PDSA says that this miniature gold medal for Magawa was created by Cleave & Co; the court medalists and jewelers. This is the same company that has created the engagement ring for Meghan Markel; the Duchess of Sussex. PDSA said that all the medals for PDSA are made by them.

This PDSA Gold Medal was created after a struck of a die whilst using the traditional medal making methods. This die is 18.25mm in diameter while the weight is 3.9 grams.

Amy Dickens; the PDSA Awards and heritage manager told that every member of APOPO and PDSA was feeling excited for the ceremony of Magawa receiving his Gold Medal.

She said, “due to the adverse effects of the COVID-19 in UK as well as in the rest of the world, the plans for the original presentation ceremony had to be re-worked. This means that Magawa is the first rat to bring two changes in the history of our charity; one to be the first rat honored with the PDSA Gold Medal and second for carrying it out via Virtual Presentation.  We are thrilled to shine this spotlight on all the amazing work Magawa has done and cannot wait for people to see Magawa in action.

Magawa has made history by becoming the first rat to be honored with the PDSA Gold Medal.

The work done by Magawa and the charity APOPO is quite outstanding as well as unique. It is estimated that nearly 4 to 6 million of the landmines had been laid down across Cambodia from year 1975 to 1998. So far these mines have resulted in 64000 deaths in Cambodia.

Director General McLoughlin of PDSA says, “HeroRAT Magawa and the work done by him have led to lives being saved directly. It has changed the lives of men, women, and children alike who were affected with these hidden landmines. With each discovery from Magawa,the it leads to lesser risk of death and injury for these locals. The purpose of the PDSA Awards Program is to help raise awareness about status of animals in our society. It is also to honor all the credible contributions that animals bring into our life. This truly deserves our highest recognition. We are really excited to present Magawa with the PDSA Gold Medal.”

Magawa is responsible with task of saving the lives by making the huge tracts of land safe across Cambodia.

Magawa is very serious with his job.

Christopher Cox, the CEO for APOPO says that Magawa has an amazing sense of smell as well as an excellent memory.

He said, “We teach the landmine detecting rats like Magawa with the clicker technique for scratching the earth on a landmine. During their training they hear the Click sound and then receive a reward in form of a treat to find correct scent of a target.”

All the land that has been made safe by Magawa and his other rodent colleagues allows for the local people to make expansions and improve their lives.

The charity organization APOPO has trained Magawa to detect landmines. He is able to do his job much faster as compared to a human with the metal detector.

The PDSA Gold Medal award was started back in 2002 and is awarded to the civilian animals for their devotion towards duty and exceptional bravery. Magawa has become an official 30th recipient for this medal award and the first ever non-canine animal to receive it.

Maria Dickens, the founder of veterinary charity created her program of Animal Awards Programme in 1943. She is of the belief that with the recognition given to heroics of these animals, it will help raise the status of animals overall in our world and help sure for better animal treatment. Besides this PDSA Gold Medal, they also awarded the PDSA Dicken Medal, PDSA Commendation and the PDSA Order of Merit.

The charity was founded back in 1917 and has offered either free or reduced cost veterinary care for pets in need. Charity is of belief hat no animal should suffer due to the financial hardship of its owner.

For the last 97 years, PDSA has given its help to nearly 20 million pets by providing 100 million treatments.

Learn more about the HeroRAT Magawa in this short video down below.

Meet Loki, The Raven Who Loves Companionship and Cuddles

Most of the time it seems like that our little planet might not seem like it but this world can still be a magical...
Read more

Most of the time it seems like that our little planet might not seem like it but this world can still be a magical...
Read more
All Posts

For a Pelican named Mr. Percival, who is living currently at the Twinnies Pelicans & Seabird based in Australia, the last month had been...
Read more
All Posts

Woman Throws Her Puppy At A Stranger, The Man Now Refuses To Give Back The Puppy

Another one of the bizarre women videos has gone viral over social media. Earlier on the last Friday night, a rapped named Glomula shared...
Read more
Load more
- Advertisement -

Luve ur pet is for people who love their pets. Help us build a safe community for your pets.