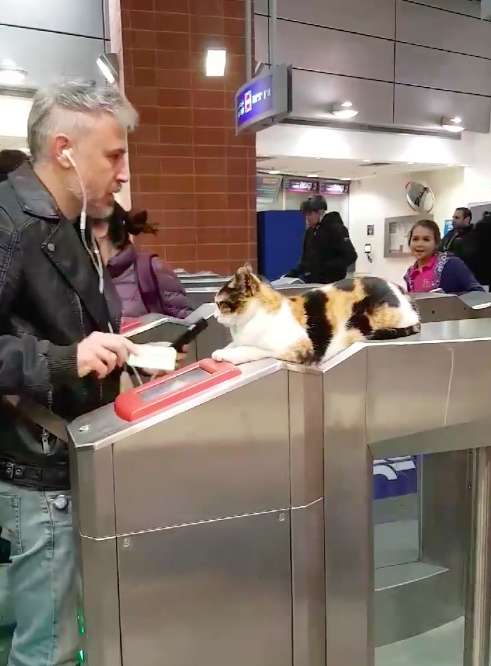 According to Dan Kashani a commuter in Israel, he along with other daily hundreds of commuters is greeted by a street cat named Shawarma.

The cat was taken on the local train station of Petah Tikva, which is a city located near Tel Aviv. Ever since he was taken in, Shawarma has been a permanent fixture at the station.

Kashani said, “I was on my way back from work. As soon as I reached the gate, there was a cat lying at the gate. It put a smile on my face.”

Although Kashani has seen Shawarma many times before, he knew that he needs to capture this moment today in a video. The video shows as to how Shawarma lays relaxedly on the turnsite as each passenger swipes their ticket.

After Kashani posted the video of Shawarma over social media, he has become a sort of an international celebrity and is gaining love from across the world.

Some viewers have also been angry as to how many of the commuters passed by this sweet cat without even petting him. However, Kashani also gave the reason for this as Shawarma is renowned for his unpredictable behavior.

Sometimes he lets people pet him but other times if he is not in the mood, he will let the passengers know by giving them a little bite or a scratch. She has to be in the mood for being petted.

However, Kashani was fortunate enough to capture the video of Shawarma into being in the mood for petting. He recorded a commuter petting Shawarma on his head.

After Kashani posted the video over social media, it was viewed for millions of times and even Kashani got hundreds of friend requests from all over the world. To his surprise, even the mayor of the city called him.

Kashani said, “The mayor on call said to me, ‘I want to meet this cat, where is this station?’ I told him the location and he went there to meet Shawarma by himself.”

The mayor gave Shawarma a lot of treats and a toy along with petting him. Kashani was like, “You are a cool mayor. I do not vote for you but from now on I will.”

Cooper; The dog gets super excited when owner scores a basket

Man Saves a Puppy Whose Mouth Was Taped Shut

Boys fight off a huge snake strangling their dog

Stray Dog found Cold, Shivering and in Pain has a happy ending