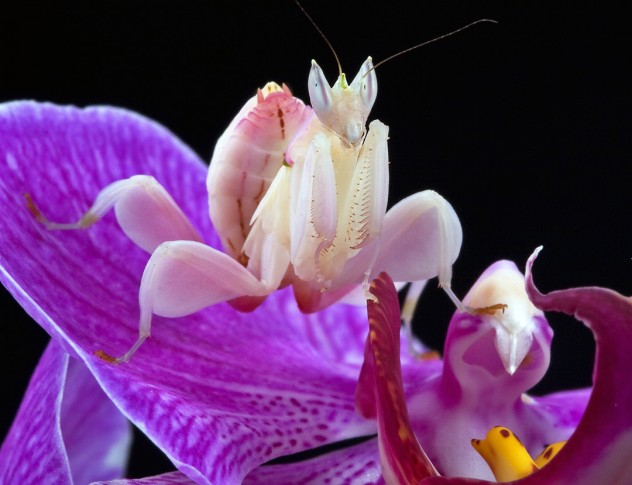 Orchid Mantis is native of Southeast Asia and belongs to the family of Praying Mantis. Unlike other members o its family, Orchid Mantis has amazing camouflage ability. The insect when young has black and orange color look w but as soon as it grows  older the color fades away and it becomes white as snow allowing it to blend in with orchids flowers, hence the name Orchid Mantis.

Pea Aphid is hated by farmers due to them attacking the legumes. Recently scientists discovered that these insects are more than just common pests. They gain carotinoids from fungi and use these carotinoids as a mean to gain energy from sunlight. They do so by making ATP (Adenosine Triphosphate) that converts sunlight into energy for living creatures. By this method they can gain energy without eating any food at all.

Fireflies use Morse code to communicate with each other:-

Fireflies have been the continuous source of amazement for scientist due to their ability to generate light in their rear parts of bodies and the signals by which they turn these lights on and off. Recently scientists have come to a conclusion that fireflies use this blinking light as a mean of communication. They use sophisticated and timed patterns for finding the suitable mate.

Wasps are resistant to radiations:-

There is a misconception that cockroaches have more resistance to nuclear fallout when compared to other animals. This is only a false rumor but scientists recently discovered that a parasitic wasp species called Habrobracon are able to withstand radiation of 180,000 rads. In comparison humans can only withstand 1000 rads.

Dung Beetle can pull 1000 times their own body weight:-

The Dung Beetle as the name suggests eats the feces and also possess very aggressive nature when it comes to finding a suitable mate. With its simple body scientists have been amazed to know that in comparison to insects, Dung Beetle is the strongest of them all. An average Dung Beetle can pull 1141 times its own body weight. In comparison to humans it is like puling two full double Decker buses with passengers.

Low priced pets to keep you company this summer

People are swapping faces with pets, it’s weird yet hilarious