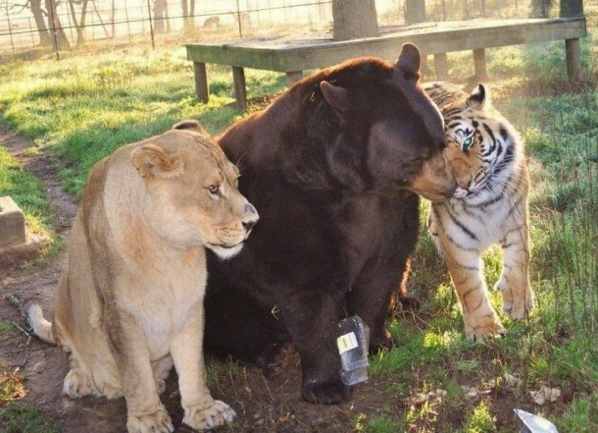 Few of the unusual friendships that brewed between animals of different species are as follows.

Koko is one of the most widely studied primates in human history due to her amazing ability to understand language. Koko is able to use American Sign Language and she also has made some new words based on her own knowledge of signs.

In 1984, Koko asked her handlers if she is allowed to keep a pet. She was given a cat which she named as All Ball and cared for her like a baby gorilla and even felt pain when cat was taken away from her. Unfortunately All Ball died in a car accident and Koko mourned All Ball’s death by forming signs of sad and frown to show her feelings. Since then she has been given many pets.

Themba the elephant’s mother was killed when he was just a calf; rangers rescued him and for time being to protect him from harms of wild, placed him in a pen house. Being a social animals, rangers placed a sheep called Albert of companionship of Themba. At first Themba chased the sheep around for my days but gradually they formed a bond of friendship and were even seen sleeping together at night. Before Themba could be released into wild he died after developing an intestinal disease.

At the Forest Lawn Cemetery located in Buffalo back in 2011 a strange partnership was found between a goose and a deer. A goose came and lid eggs in an urn and sat there to incubate them. Deer took it upon itself to protect the goose as its guard. Whenever anyone came near goose be it other birds, animals or even humans she would protectively ward them off. The partnership remained for three weeks until goslings hatched and after wards deer wandered off back in the forest.

This particular friendship took place when a lion, bear and a tiger were rescued by police form a drug lord’s house. They were found as cubs and were moved to an animal sanctuary in Atlanta. These three animals are known for their excessive aggressive nature but after being grown into adults they can still be seen playing with each other and even sleep together in same wooden shelter at night.

Orangutan named Suriya and dog named Roscoe were both raised in an animal sanctuary located in South Carolina. Roscoe was potted in the shelter by Suriya while he was wandering and keepers allowed Roscoe to be in the shelter and even let him spend time with Suriya.

After few months they become bosom friends as Suriya now takes Roscoe for long walks and also swims with him within the enclosure. They have also ridden on the back of an elephant and their keepers took pictures of his memorable moment.