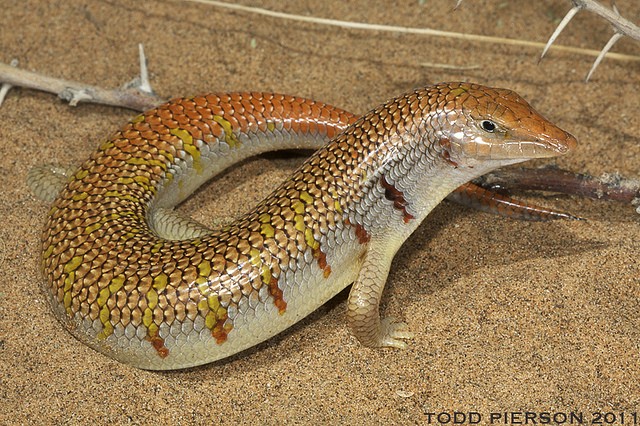 Deserts are some of the least hospitable places on Earth, deterring man and the majority of animal species found across the globe. However, necessity is the mother of invention and nature makes sure it is remarkable. Some of the most surprising and impressive animal adaptations in Earth’s history have been the result of evolution. In this account, we make a survey of animals that take advantage of harsh desert environments, surviving and even thriving through exceptional physical, behavioral and biochemical adaptations.

The eyes and nostrils of the Kenyan sand boa are positioned on the head in a manner that limits intrusion of debris into these sensitive areas. Able to live beyond one year without food, this species uses the sand to its advantage while hunting in two ways. First, the sand boa lies under the sand, seizing prey as it moves past the hidden snake. Second, small prey may be killed by being dragged under the sand and suffocated in the fine grains before consumption.

The sandfish is named after its ability to actually swim through the desert sands, enabling efficient movement and apparently saving it from some of the harshest of the Sun’s rays by being in the sand rather than always on top of it. Able to travel under the sand at considerable speed, sandfish move their legs in a manner comparable to a human swimmer’s crawl stroke as they maneuver and propel themselves among the grains. Sandfish have smooth, sparkling skin with scales that shine and appear almost fishlike due to their gloss, minus any slime, of course, since reptiles boast dry skin.

Tiny, sandy, and feline to the fullest possible extent, the sand cat resembles a house cat and stands out as the only species of cat that can be correctly classified as a true desert dweller. The sand cat is native to North Africa, Southwest Asia, and Central Asia. Sand cats boast special padded paws covered with long, tough hairs that protect the cats’ feet from hot sand and also help to support their weight among the shifting grains, preventing the cats from sinking.

A thick coat plays a critical role in both insulating the feline from the hottest of summer conditions and protecting it from hypothermia during cold desert nights. Equipped with dull claws that do not fully retract, sand cats creep along low to the ground, leaving barely a footprint. They avoid burns due to the thick fur on their feet.

The desert tortoise has an impressive but peculiar physical adaptation that allows improved hydration management. This adaptation comes in the form of an oversized bladder that can carry extra water. In this specially evolved bladder, a desert tortoise can carry greater than 40 percent of its weight in urea, uric acid, nitrogen-based wastes, and water. alarming a desert tortoise may prove to be exceedingly dangerous to its survival, causing it to abandon its reserve of water due to fear-based urination. With their thick rear legs and flatter front feet, desert tortoises have an easier time walking in the sand.

Finding innovative ways of gathering or retaining water are the hallmarks of desert evolutionary adaptation. In the case of desert cockroaches, a pair of small bladders is located in the mouth. These function by condensing available water from moisture in the air and then conveying it back into the cockroach. Barring any blockage, these bladders will function and deliver moisture to the cockroach. It is the nocturnal female that looks so close to a trilobite, being wingless and spending time in burrows during the day to avoid light.

Gila woodpeckers drill into the forest-treelike trunks of the cacti, sheltering and nesting in that space. If that were not enough, many small songbirds perch and nest among the cacti stands. The largest and most impressive North American wren, the cactus wren, specializes in life among the cacti, even feeding on the fruit in contrast to smaller, almost exclusively arthropod-eating shrub, marsh, and woodland wrens.

Through examination of Australian thorny devil and Texas horned lizard skin and scale structures, a bizarre physiological adaptation has been discovered. The skin of lizards prevents water loss and also keeps water from getting in through the skin, but a novel way in which lizard skin assists in precision water gathering has developed. Through the process termed “cutaneous water acquisition” as described in the case of the Australian thorny devil, these lizards use miniature, tubelike channels to absorb and then direct water from the point of contact cumulatively toward the mouth of the lizard. Through this adaptation, the lizards are able to gather and then concentrate the water gleaned from rainfall, damp sand, and pools of water encountered on occasion.

The desert pupfish are representative of the extremophile class of animals. Desert pupfish are considered to be living fossils, offering evidence of a historic interconnection among lakes and survival through natural selection to adapt to shrinking and heating bodies of water, including desert pools, springs, marshy patches, and streams. The rare Devil’s Hole pupfish lives in an area just over 1 meter (3 ft) wide with a significantly greater depth, while the desert pupfish can survive temperatures of 43 degrees Celsius (110 °F).Devil’s Hole pupfish, recognized and protected legally as an endangered species, may live for only six months to one year.

After consuming a meal, the roadrunner’s digestive system retrieves water from the bird’s feces as they sit in the excretory canals. Prior to elimination, the water is withdrawn through this advanced, unappetizing, and peculiar physiological process, and only then the feces are expelled. Roadrunner has two more impressive hydration management adaptations. One is to hunt prey that provides water through tissue and blood after consumption. Another is to secrete excess salt through glands located above the bird’s eyes. Such desalination glands are typically found in seabirds, not in land birds.

Lies about Dogs We All Believe

Things which only Husky owners understand

Heartwarming Photos of ‘The Walking Dead’ Star With His 3 Rescue

Kirk; the dwarf hamster gets a special gift after he hurt his paw