HomeAnimalsA brave man jumps in a lake to save life of a...
AnimalsRescueSafetyVideo 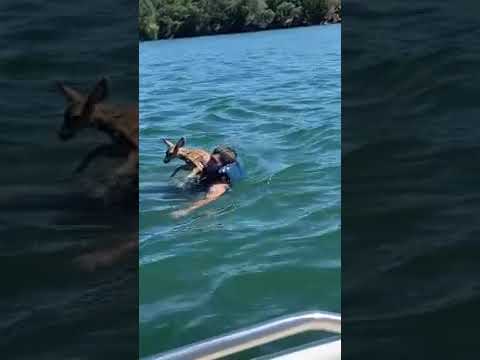 A man named Kenny Croyle was out with his family to spend a beautiful summer day at the Folsom lake located in California. However, what Kenny did not know at the time that he would actually end up saving an innocent life.

However, this was all fated to happen.

Croyle said to media, “After taking a look around for a while we were finally able to spot a swimming fawn in the water which only had its head outside the water. We saw the fawn for a little while and we could see that it was near exhaustion and was nowhere near close to the shore.”

Seeing that, Croyle knew that he had to do something so he jumped in to save the day.

Below is the video of Croyle’s big moment of bravado that saved an innocent life.

After Croyle took the fawn to his boat, his wife wrapped the poor fawn in a towel and dried him off. They were later told that other siblings and mother of this fawn were near the bank of the lake. The family decided to make this a happy reunion.

Croyle said, “We then moved our boat to the shore and placed the fawn near the embankment of the grass near the lake bank. The fawn looked around it for a few minutes and then he jumped up and ran toward where his mother and other siblings were.”

The tragedy that could have left the deer family one baby fawn short was finally averted.

As for Croyle, he said, “It feels really good to be known that we actually gave that deer a second chance at life. I am very glad to have saved him.”

Louis, the Grumpy Cat is becoming a social media star with his ‘angry expressions’

This is What Zookeepers Do after Closing Hours

Before and after photos of dogs rescued by kind people