HomeAnimalsStray Dog Finally Feels Relaxed and happy After Getting His matted Fur...
AnimalsRescueSadSafety 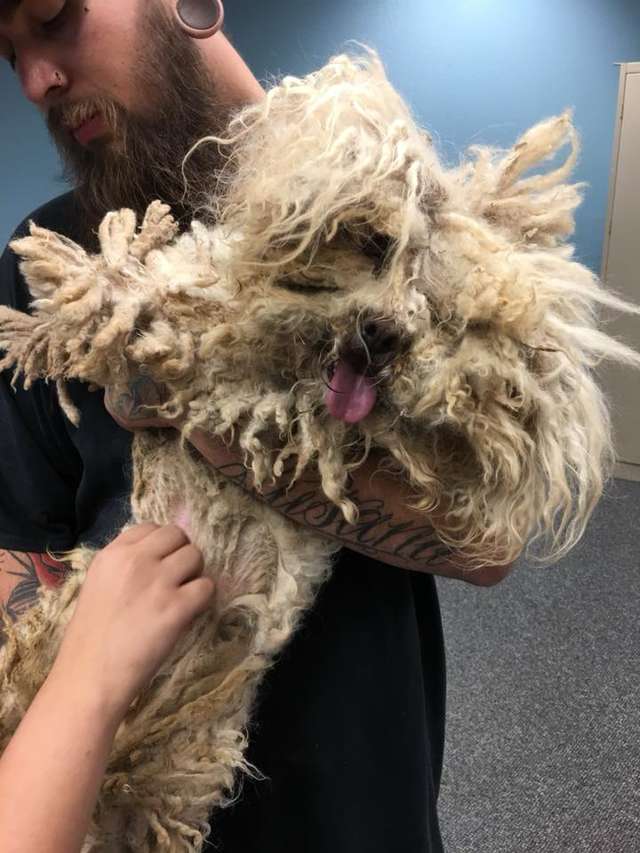 For as far as the little dog named Jareth could remember he had spent his life mostly being imprisoned. However, this imprisonment was not in some cage but under his own matted fur.

Fortunately for Jareth, all of this is now behind him.

Jareth is the name of 5 years old Poodle that was surrendered to a local shelter named Valley Animal Shelter located in Fresno, California. While the reasons for his surrender were not clear, the dog certainly had suffered major neglect from his owners.

Community relations coordinator at the Valley Animal Shelter named Devon Prendergast said, “when Jareth came to the shelter, our staff was very shocked to see him. One of his eyes had been shut close but to his matted fur while he also had stickers intertwined in his fur. His fur had been so matted that his paw could barely touch the ground and he was barely able to move around.”

But Jareth was now in really good hands. He might have not known it but he was.

Devon Prendergast said, “Our team of animal care rushed to the scene and they had to sedate Jareth in order to remove all that matted excess fur.”

It was a slow process but finally, Jareth was freed from the shackles of his matted fur.

All in all, the workers shaved off nearly 2 pounds of the matted fur.

This emergency makeover not only transformed the appearance of Jareth but also completely altered his personality.

Devon Prendergast said, “Even after suffering from neglect and trauma, Jareth after having his fur removed was a vocal dog filled with energy who loves to have long walks while wearing shin new petted coat.”

But wait for it Jareth, the best might come after this.

After Jareth fully heals from his long traumatic conditions, he will be up for adoption to have a forever home.

Construction Workers Rescue a Raccoon From Turning To Stone In Concrete

A Cute Love Story Between Lola, a Golden Retriever, and Loki, A Staffordshire terrier

Bizarre Ways People Have Been Killed By Pets