HomeAnimalsMan Sees A Creepy Doll Head On A Beach But Then Notices...
AnimalsSadVideoWorld 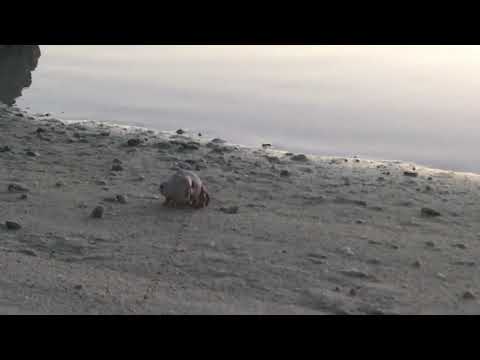 A man named Joseph Cronk, earlier this month was having a stroll down the beach of Wake Island, which is a remote atoll located in the middle of the Pacific Ocean. He was planning for a nice sun setting evening when he found something not only surprising but also concerning. To be fair, it was also a little bit creepy.

In front of Joseph Cronk was a decapitated head of toy doll on the sand and that’s when thing got creepy. The doll head started to move.

Below is the video of the moment which Joseph Cronk recorded immediately.

Moving the hollow plastic head was nothing but a hermit crab who had taken this doll head as his new shell. Cronk was instantly able to see that the little guy was not at all comfortable to move this head easily.

Cronk said to media, “The crab still seemed fine as it went into the water and seemingly sat there for a while. I guess he was pondering the life mysteries (said Cronk chuckling).

However, Cronk who also at first thought for the scene to be a little amusing also started to ponder on it. The crab was only able to choose this doll head as his new home due to it being a part of a much larger problem; the improper disposal of the garbage.

According to analytical reports, nearly 12.7 metric tons of plastic trash is dumped by humans into the waters of the world’s oceans.

Cronk posted his video along with the picture down below to help inspire the people for doing their part to clean their mess up from oceans.

Cronk said, “I want to get my message about the trash problem out there in the world. It really killed me inside to see all that trash lying around on the beaches there. I never thought that the crab video might go viral but now I want it to raise more awareness.”

Cat calms down the kid who’s having a Sensory Meltdown