HomeAll PostsGuy Comes With A Dressed-Up Llama At His Sister’s Wedding Just Like...
All PostsAnimalsfamilyFunnyVideoWOW 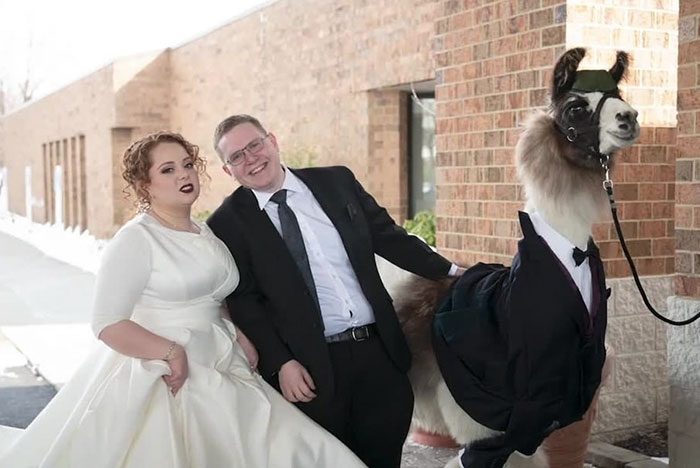 The relationship of brother and sister is filled with mischiefs throughout the life and one brother proves that this sibling love and the pranks will never know an end. This is the story of a man named Mendl Weinstock who made a promise to his sister named Riva 5 years ago before her wedding. That promise was so hilarious in its own sense that everyone only took it as a joke and laughed about it. And now when the moment finally came, Mendl Weinstock decided to make that promise true and surprise her sister and the guests at her wedding.

Mendl Weinstock decided to make true to his promise he made 5 years ago to his sister about crashing her wedding in a hilarious way.

Mendl posted a picture of himself with his sister in her wedding gown and a llama wearing a Tux. These pictures were posted on Reddit and since then only 3 days have passed with post getting 150K+ likes with thousands of funny comments. Mendl also posted on the same post that fulfilling this joke had cost him about 450 dollars.

After the post went viral, Mendl talked with the media in detail about the whole thing as to how it started. He said, “My sister was talking about her wedding when she was not even dating anyone. Just to make her really made I said that if she makes me come to her wedding, then I am going to bring a llama with me. After I teased her for a few minutes she tried reverse psychology on me and said that Llama was invited at the wedding too.”

Riva also said in the very same interview, “He had been torturing me with this for a long time and has been reminding me of this for the last 5 years at least twice every week. I tried to strike many deals with him to make sure that he would not do something like this but lo and behold, a llama actually came at my wedding.”

She also said, “When Mendl sets his mind to something, he really tries to make it happen. When I told him about my engagement, he said great, I am talking from a Llama farm right now. After one hour of the very same call, he called me back and said that the llama rental was confirmed.”

The first reaction of Riva after seeing he llama at her wedding with her brother was, “I Hate You So Much” but it was that sibling love-hate kind of thing.

This is the video of the live reaction of Riva when she saw the Llama donning the wedding tux at her wedding.

Guy Has To Sweep Carefully Around His Lazy Dog

Holiday hazards for your pets

Adorably Curious Animals That Will Melt Your Heart