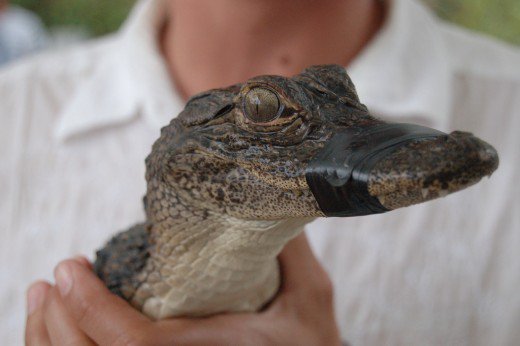 Various people around the world are in love with multitude of species of the exotic animals. Some of these animals are even legal to be purchased but at the same time they are quite dangerous and can pose serious threat to life. We have gathered a list of such legal but dangerous exotic pet animals.

Crocodile Monitor is a deadly species of crocodiles that can even grow up to 10 to 12 feet in enclosed captivity let alone in the wild. Pet owners of these Monitors do not usually keep big enclosure for them, stuffing them inside small cages one over another.

Their animalistic behavior is variable by each individual. They can be small but their bites are still very fierce due to their serrated teeth and strong jaw power. Their bites on average can cause finger amputations or deep tissue wounds. Their saliva is densely populated with bacteria that can result in rapid severe infection to bitten area.

Large constrictor snakes are a problem to keep as pets because they are quite escape artists. Owners that do not diligently study before keeping these snakes as pets can feel the problem after they escape. If there is even a small opening in their enclosure they can find a way to escape and can cause unseen terrifying menace. They are often reported by owners to escape and result in strangulation of other pets and even human children.

Wolf dogs are considered more of a threat to human life when compared with original wolfs when kept as pets. Wild animals have the natural tendency to be cautious of humans and even show fear when facing them. However for Wolf Dogs they have the independent nature from their Wolf blood and on the same hand they have no fear of humans arising from their dog blood. All wolf dogs do not suffer from problematic behavior but it is not known which specific breed has these problems.

If not given large, secure enclosure along with mandatory training, wolf dogs can act put on heir wolfish impulse and combined with loss of human fear can pose a threat to human life.

Animals are quite popular for keeping as pets in many Asian countries. However they pose a real threat to human safety. They cannot be deliberately attacking and still harm someone by accident alone, due to their enormous size and insane power.

If they get spooked by any reason they kill the individual in the close proximity whether it is their master or not.

Chimpanzees are not only equipped with incredible body strength but their cognitive functions are more complex as compared with elephants. They are a completely different species from monkeys but like them their behavior can totally change at any given moment under unexplainable circumstances. These animals might be legal in some countries to keep as pets but their uncertain behavioral change and enhanced cognitive a well as increased bodily strength make them a dangerous choice for an exotic pet.

Animals That Paid the Price of Tourist Stupidity and Cruelty