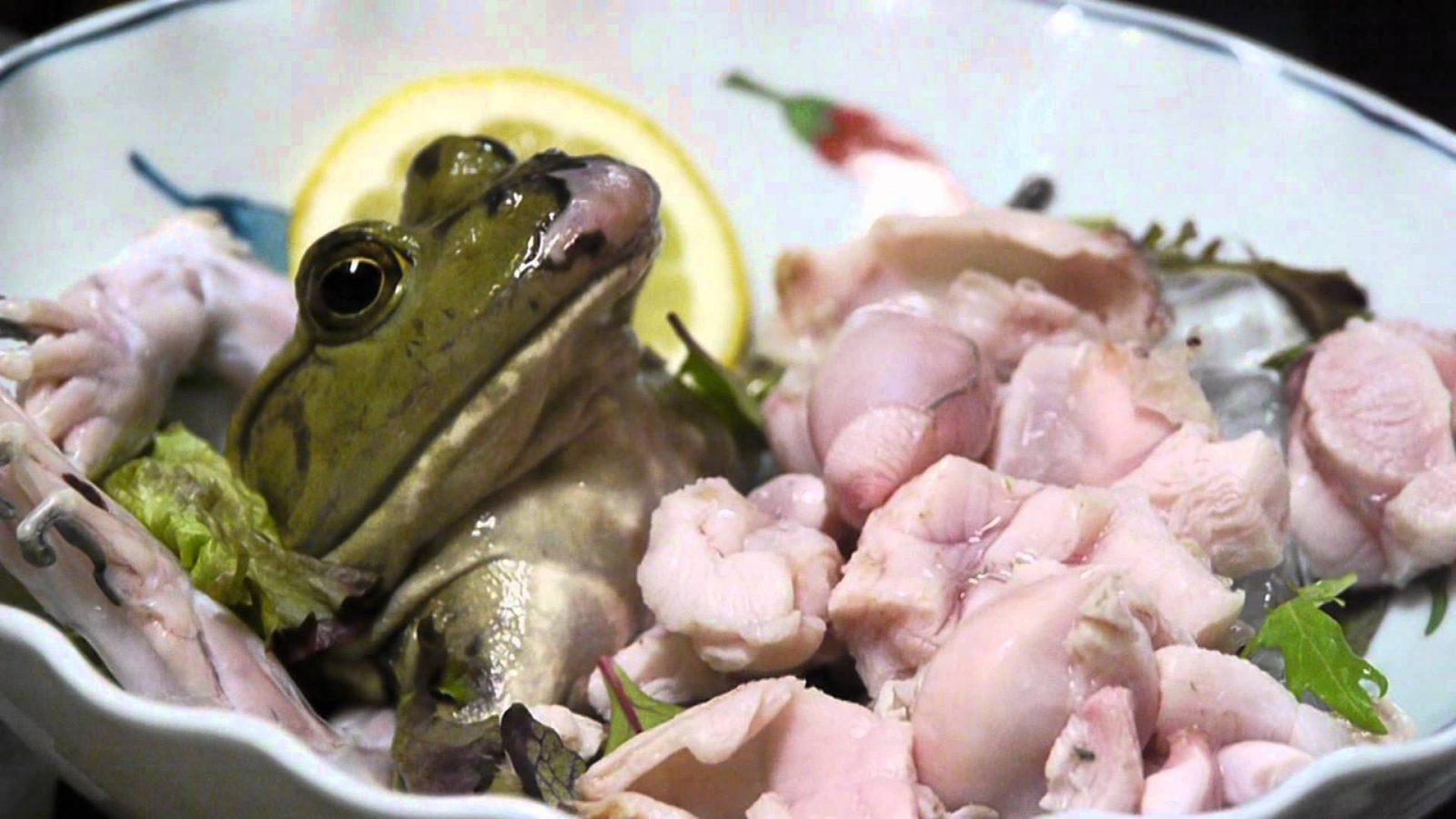 I was always raised to avoid eating lobster, because they’re cooked alive. If they’re dead before cooked, they can be quite dangerous, as the bacteria in them spreads much faster than normal. While some people argue that the way they’re cooked means they feel no pain, it’s really a matter of how much trust you put in your chef. But when the animal you’re about to eat is still alive when you bite into it, that’s a pretty different story altogether. Below are few examples of animals that are prepared and consumed alive. Be warned—some of the entries can be quite graphic

Sannakji is a dish served in Korea. Usually seasoned with sesame seeds and sesame oil, the main component of sannakji is nakji, which is a small octopus. The tentacles are usually cut from the live octopus and brought straight out to the customer, although sometimes it is served whole. The main “appeal” of this dish is that when chewed, the tentacles are still wriggling. But because of this, the suction cups on the tentacles are still active also, and so they can become stuck in the throat of whoever’s eating it.

In Italy, Sea urchins are called Ricci di Mare. Since the edible part—the roe—is on the inside of the sea urchin, there is a special tool to open them up—though it can also be done with a scissors.

They can be eaten with a spoon, although many people prefer to lick them out with their tongues. But given the extremely spiky nature of sea urchins, you’d want to be careful when ingesting them.

Odori Ebi is a type of sashimi that contains a baby shrimp. The shrimp has its shell removed, and sometimes its head as well. These can be deep fried and served alongside the rest of the shrimp, which is still moving its legs and antennae while being eaten. The shrimp can be dipped in the alcoholic drink sake to intoxicate it and make it easier to eat. It only dies, finally, when being chewed. Odori Ebi is quite expensive to order in a restaurant, because to serve the shrimp alive, it must be prepared quickly and skillfully.

Drunken Shrimp comes from China, not Japan, and is not always served live. But when it is, it is always served in a bowl of Baijiu, a drink with about forty to sixty percent alcohol content.

Another main difference is the size of the portions: this recipe involves full grown shrimp, rather than infants.

The shrimps are far more active. They jump around, trying to escape, and the consumer has to catch it and stuff it in his mouth before it gets away. They can even carry on moving after being swallowed—provided you haven’t chewed them to death.

Noma, based primarily in Copenhagen has ranked as the best restaurant in the world for three years now, so it’s not all that surprising to find that they have some innovative ideas. One of these ideas is their salad—their ant salad. They serve a salad crawling with ants, which are chilled so that they move slower, and which are supposed to taste like lemongrass. Plenty of cultures consume insects, true—but not many of these cultures charge over $300 for an insect salad.

Casu Marzu is a traditional Sardinian cheese made from sheep’s milk. Now obviously milk isn’t an animal, so you must be wondering what this is eaten with. Well the answer is, in my opinion, the most disgusting one so far: maggots. The cheese is brought to a stage that some consider to be decomposition. Larvae of the cheese fly (Piophila casei) are brought to the cheese to help break down its fat. They eat through the cheese, making it soften, and seep a liquid known as lagrima (teardrop). While some people remove the maggots before consumption, many people consume the cheese maggots and all.

For this dish, a frog is kept in the kitchen until somebody orders the frog sashimi, at which point it is taken out and sliced open on a cold platter. The sashimi bits are taken off, and then the rest of the frog is simmered to make a soup.

Presumably, if you’re ordering this dish you have no qualms about watching a frog be disemboweled alive in front of you and then cooked for your culinary pleasure

Dish contains, of all things, the still-beating heart of the frog.

Also a type of sashimi, ikizukuri means “prepared alive”, and is a fish dish. When the fish is selected, the chef will gut it and serve it almost immediately. What sets it apart from other entries in this list is that the point of ikizukuri is for the chef to slice off a few pieces of fish, but leave the whole thing largely intact. Not only that, but the bits that are cut off are to be done in such a way that the person eating it can see the fish’s heart beating and mouth moving while they eat it.

Most people who eat oysters don’t even realize that they’re alive at the time Oysters are generally served live because they deteriorate much faster than most other animals when dead. When their shells are cracked open, they can survive for a significant amount of time. This is why oysters are almost always sucked directly out of their shells.

Hilarious pictures of clumsy animals will give you cramps