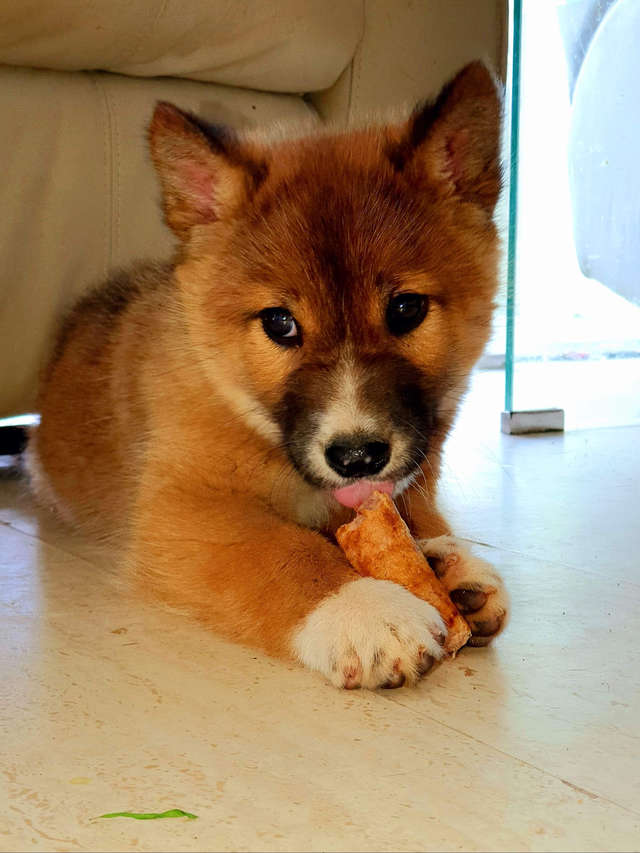 A woman living in a small town named Wandiligong in Australia made a very fun discovery when a rare animal landed in her backyard.

At first, the woman whose name is Jayne Guiney thought that this was a lost puppy or a cub of a fox.

She said, “I woke up on hearing the faint whimpering sounds so I went out to check it in my backyard.  I looked up and then saw a small animal being right on the edge of the 3-meter tall cliff by my house. I made a grab for the animal as it was going to fall and he simply fell right into my arms and then cuddled. I thought that it was a fox as his face was pointy like theirs but then I saw him be robust like a pup.”

After taking care of it for a week, she took the animal to a local vet and the vet realized that this was no puppy and immediately called the Australian Dingo Foundation, which is a nonprofit sanctuary that is working for the conservation of dingoes.

The Dingo, which was named as Wandi, was about 5 weeks of age and had a scratch mark on the back from the preying bird who most likely had stolen him from his family.

Wandi was too little to know any proper behavior of the Dingoes so he was placed with a playmate of his kind of about the same age.

A volunteer working for the sanctuary, Kevin Newman said, “He was a real hit with the workers here.  He was really friendly and the world sinks his little sharp teeth in your arm no matter who you were.”

Newman told that Dingoes are actually the equivalent of the Lions. He says, “They do not bark but howl for communicating and they also have their annual breeding season. Cubs can only be born during the winter season.  They have never been domesticated.”

A genetic test revealed that Wandi is actually a true 100% alpine Dingo of Australia and this great news for the sanctuary that is working hard for their preservation. Alpine Dingo is at a huge risk of getting disappeared from the face of the earth.

Newman said, “Most Australians only see these Alpine Dingoes as a threat to the agriculture even if they do not hunt sheep because these dingoes are unable to process the fat. They are also too little for taking on cattle as prey. In some areas, these dingoes are also called as wild dogs. People often put baits and traps to kill them despite these dingoes playing an important role in the overall Australian ecosystem.