HomeAnimalsA little dog was trapped in thick tar and kept barking until...
AnimalsRescueSafetyWOW 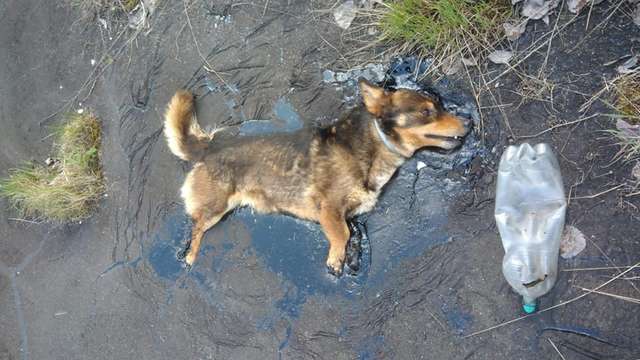 Luckily for the dog, the workers decided to take a look as to what was causing this dog to bark continuously. They followed the barking noise and they were ultimately led to this horrific scene.

A dog was lying there, stuck in the pond of tar from which he was unable to even move from and was in need of dire help.

Workers were not able to pull the pup out by themselves so they called out for help to a rescuer named Joanna Godlewska who works with the Niczyje Animal Foundation. As soon as she got the call, she rushed to the scene.

Godlewska told media, “When I arrived at the scene and saw the dog’s condition, I was moved to tears by sadness.”

They believe that the dog that was most likely abandoned was seeking warmth and lay down on the illegally dumped tar in the middle of nowhere. The dog did not realize that he would be stuck in it.

No one had any idea as to how long had the dog been stuck there but one thing they were clear on was that he could not survive there for much longer.

Godlewska called for a local firefighter department’s help who assisted her in getting the poor pup out of the tar. As they were working to help the pup, hope started to shine in its eyes.

Godlewska said, “Pup knew that we were helping him.”

Rescuers cut off the hardened part of the tar on fur while used cooking oil to soften the rest of it.

After a while, they were finally able to lift him out of the tar pool.

From there, the dog was sent to a vet’s clinic where they started to treat him immediately. They scrubbed his body hard for removing the rest of the tar.

The work, needless to say, was quite a messy one.

Fortunately, the dog, except having minor injuries to his face, was in good health.

Since his rescue, the dog has been through many such cleaning session and his hope to live has been stranger with each one.

Godlewska said, “He is in better condition now.”

The dog has now been named as Farcik and is now no longer a dog that was unloved an abandoned.

Farcik is now surrounded by people who love him and once he fully recovers, Godlewska plans to adopt him as his own.

Man sees a kitten with a shoelace tied around its neck

Say No to use of Animals in Sports and Entertainment

These Baby Animals Are Too Cute for Words to Explain