Say No to use of Animals in Sports and Entertainment 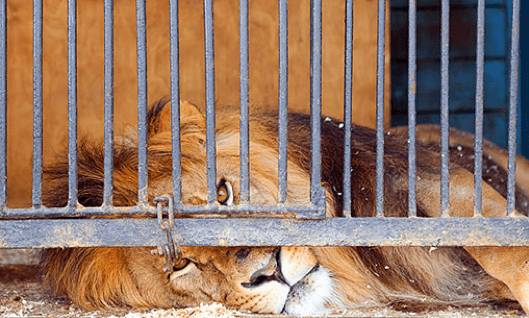 Majority of the people grew up seeing animals held captive at zoo, performing at circuses or other sport events for human entertainment. For thousands of years animals have been used to amuse humans in sporting events like Roman chariot racing to present day hunting, rodeos etc. With the passage of time it has become part of the society and culture. In this process countless animals are hurt resulting in the loss of different species of animals. Hence using animals in sports and entertainment have raised concerns for animal rights that whether they should be used for such purposes or not?

Like human beings animals are also living creatures with emotions, feelings and a certain way of life. So if human beings are not caged forcefully or trained harshly and vigorously for something that is against their will or interest then why are animals subjected to such horrible acts? Today in the modern world there are other ways or things either invented or created by man that can entertain and amuse people, knowing this and still putting animals to stake is one immoral act to do.

There is a dire need to realize that animals are not sent to this world for sacrifice and for serving the purpose of human entertainment. Animals are beautiful creatures that like human beings deserve a better life and should be set free rather than being caged, tortured or getting them involved in any act that is violent and results in their loss. Hence no animal deserves to be abused or killed in the name of entertainment and such events which involve unethical treatment of animals should be banned

Animal Rights emphasizes that animals should not be used for any type of entertainment. The system of zoos drags back from the ancient times when interesting species were captured and presented before rulers for entertainment. Animals were captured from the wild and “kept in stark cement cages surrounded by metal bars, settings that were far less comfortable than their original homes”. Animals kept in zoos are confined to areas that are much smaller with inappropriate living conditions as compared to the wild. Furthermore animals are subject to cruelty in circuses.

“Unethically cruel methods” are used by trainers to train animals such as tigers, elephants and lions for the shows. Since there are no restrictions by the Animal Welfare Act on what training methods should be used so “physical punishment has long been the standard training method for animals in circuses” including drugging animals to make it easier for the trainers to handle them. Living conditions of these animals are extremely terrible with animals being chained and kept in small cages for long periods. Other events that involve animal abuse include cruel sports

like Rodeos, bullfighting and dog racing that are popular in some countries. In Rodeos “horses and bulls are choked with leather straps and shocked with electric prods to get them

Dogs are used for racing till their performance level deteriorates in which case either they are replaced or shot. Due to such cases these dogs are also deprived of basic vaccines and injuries are ignored. All these events are a source of exploitation of animals in the name of entertainment and results in animal abuse. “Like, humans, animals desire to live freely in their own natural habitats and should not be taken from their homes to bring human beings pleasure or profit”.

People for the Ethical Treatment of Animals (PETA) is an animal rights organization that works and discourages the use of animals as source of entertainment. Animal sports like bullfighting, dogfighting, cockfighting, rodeos, horseracing, greyhound racing, hunting and fishing are all regarded as “cruel sports” by PETA. All these sports involve animal abuse in one way or the other and there is nothing “sporting” about these sports. Animals used in fighting events are chained in harsh conditions and sometimes starved in order to increase the level of performance. Animals get severely injured during fights which results in death or being killed by trainers to whom injured animals are useless. Bullfighting involves cruelty towards bulls that are drugged and tortured before being repeatedly stabbed until their death. In racing events dogs are chained and forced to race as in dog sledge racing. Dogs are drugged to boost their performance and are often kept in places with hardly any space to move. Most of these dogs are later either killed or sold for experiments or animal testing. Hunting and fishing are two other “violent forms of entertainment” that is destroying different animal species and leaving others “orphaned or badly injured”.

Horse gets stuck in a swimming pool; a crane was needed to get him out

Animals Who Are Definitely Wondering “How Did I Get Here?”

Woman did not know that a giant snake was around her porch, fortunately it was removed safely