Most Terrifying Insects in the World 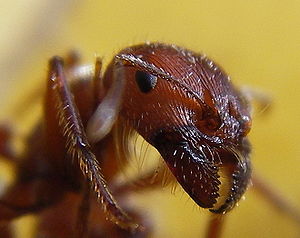 Many insects are cute, cuddly, and harmless. But some insects are nightmarishly terrifying and downright dangerous. They can cause intense pain on their enemies while some deliver bites or stings that can even result in death. Here is a list of the most terrifying insects in the world.

This creepy-looking caterpillar resides in South America and is responsible for several deaths each year. The giant silkworm caterpillar has tiny bristles that release a potent toxin that is poisonous when ingested. It has been called the “assassin caterpillar” or “killer caterpillar,” but it is just the larva of a giant silkworm moth (Lonomia obliqua). The venom from this insect can cause gangrene-like symptoms throughout the body, the leakage of blood into the brain, and even death.

The world’s most painful insect sting belongs to the bullet ant. It is also the world’s largest ant and possesses a powerful, venomous sting. A worker ant can be over 2.5 centimeters (1 in) long and looks like a wingless wasp. Bullet ants are most likely to be found in Central and South America. The bullet ant gets its name from the shot of intense pain that it delivers. The venom-filled sting can produce agonizing effects in the recipient for up to 24 hours.

Amazonian giant centipede is often considered the world’s largest centipede. It is widely found in South America and the Caribbean and is also known as the Peruvian giant yellow-leg centipede. The body of this creature consists of 21 to 23 well-marked sections, each containing legs. The venom that this critter carries is potent and fatal to many small animals. It is usually nonlethal to humans.

Much like the mosquito, the tsetse fly sucks out your blood. The fly has tiny serrations on its mouth that saw into your skin. These insects also transmit diseases, and some can cause an illness known as “sleeping sickness.” If a person goes without treatment, the infection is usually fatal.

There are about two or three dozen species of the tsetse fly, and they are mostly found in Africa. This bloodsucking fly is usually 6–16 millimeters (0.2–0.6 in) long and is robust with a yellowish or brownish color.

They are mainly found in woodlands and are most active in the morning.

The human botfly looks like a bee, but it has more hair and fewer bristles. They usually only attack livestock, deer, and humans. The female fly attaches her eggs to mosquitoes, other flies, and insects, which carry the eggs to the host. Body warmth causes these eggs to hatch, and then the larvae begin to penetrate the skin.

The larvae are usually removed by a simple surgical procedure that includes local anesthesia. The larvae can also be popped out by applying pressure but only in certain cases. Antibiotics are given after the procedure, and the wound will normally heal in less than two weeks.

The killer bee (aka Africanized bee) resembles a common honeybee so much that a laboratory has to measure the bee to even tell the difference. They have small colonies, so they can build unique nests in places like tires, crates, boxes, and empty cars. These scary bees have been known to chase people as far as 0.4 kilometers (0.25 mi) if they get excited and aggressive. Someone who is being chased by an Africanized bee should run in a zigzag pattern and seek shelter as quickly as possible. Never jump in the water to hide from them, though, because they will only wait around until you come back up for air.

Colonies of driver ants can contain up to 22 million individuals. These creatures decimate any insect that gets in their way, which is why they can keep moving without ever starving. They are mostly found in Africa, and they prefer to live in forests. These insects don’t usually sting their prey. Instead, driver ants rip their victims apart with their mandibles.

The largest species of hornets found in the world is the Asian giant hornet. They live throughout Eastern Asia but are most commonly found in the mountains of Japan. They are known to be extremely aggressive and fearless. Asian giant hornets feed honeybee larvae to their young and destroy entire beehives in the process. One hornet can tear 40 honeybees in half in under a minute! The Asian giant hornet has a 6-millimeter (0.2 in) stinger that injects venom powerful enough to dissolve human tissue.

The most venomous insect in the world is the Maricopa harvester ant. They contain the most toxic venom, which is made up of amino acids, peptides, and proteins. The venom is 12 times more powerful than that of a honeybee. It would take around 350 stings to kill a human being. When a Maricopa harvester ant stings its victim, it releases pheromones that signal other ants in the colony to join the attack. They spend most of their lives in desert areas and are most commonly found in Arizona.

Taxidermy FAILs That Are Both Funny and Horrifying

These animals are so ugly that they’re actually super cute