HomeAnimalsAnimals whose bites can kill you gruesomely
Animals

Animals whose bites can kill you gruesomely 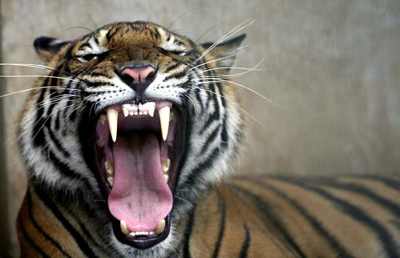 Animals are wild creatures that act on impulses. Even if you keep them as pets from life their natural instincts can kick in any time and they can attack you. Some of the animals and especially the carnivorous ones are equipped with strong jaws that can bite with a surprisingly strong force and if a human is their victim only a miracle can prevent them from a gruesome death. We present to you some of the animals whose bites can kill you gruesomely.

Tiger is the biggest species of the Cat family group who I also a solitary hunter by nature. They hunt mostly at night and stalk their prey. They attack their prey by biting down on its neck to cut down the flow of both air and blood going towards the head. Their powerful bite has a force of around 1050 psi. They usually avoid human contact but reports have been there of trigger attacks on humans.

Grizzly Bear has the bite force of about 1200 psi.

Grizzly Bear is the North American sub species for the Brown Bear but is only far aggressive and larger in size when compared with brown bear. It may be huge in size but it can run with a speed of 56 km/h.

It is believed that due to their size they are unable to climb on trees like other bears which use this skill as a defense mechanism. Grizzly bear not being able to climb trees switched to aggressive nature to ward off any threat. Grizzly Bear only attacks humans if it is threatened or spooked or if his cubs are poached.

The bite force of Gorillas is measured at about 1300 psi.

This is quite surprising because Gorillas are purely vegetarian by nature. The reason for this much jaw force and strong jaws is that they were given these jaws by evolution of chewing down hard plants like bamboos. Along with jaws, their neck muscles are also astonishingly strong than most animals.

They are close relatives to human after chimpanzees. Gorillas are generally gentle creature and avoid attacking humans unless they are provoked.

Jaguar has the strongest bite force in the whole Cat family and whole of land mammal species. Jaguar is the real king of the jungle and is mostly found in Mexico to Argentina region. Jaguars unlike other cats kill the prey by biting down its head. Jaguar is also a solitary hunter by nature. Its bite is recorded to be so strong that it can break through a turtle shell easily. Their numbers have already vanished from Southern United States but some breeding population is rumored to be in Arizona.

Nile crocodile has the highest biting force in animal kingdom and it is about 5000 psi.

Nile crocodiles mainly feed on fish but will attack anything that crosses their way.

Dog passes out from overwhelming joy