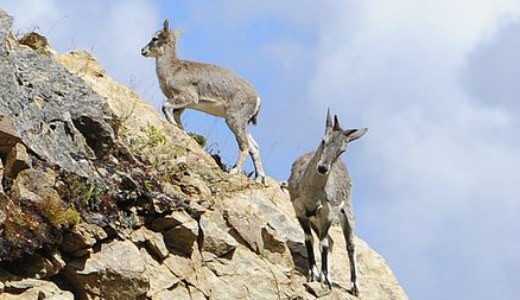 Brown hares have the ability to not only run at a speed of 72 km/h but during their sprinting time they can also make use of their long hind legs to make huge jumps. These jumps allow them to evade their predators with ease.

Red Kangaroo is the world’s fastest jumper amongst all species of land mammals. Red kangaroos are able to jump with a speed of almost 56 km/h which is a sight to see.

Bharal is a species of goat that are found primarily in Himalayan region. They are naturally adept at jumping cliffs and small hills with ease. Their jumping speed through these dangerous cliffs and hills is astounding to a degree of impossibility.

Klipspringers which are about 1.5 meters in height are able to jump ten times high as compared to their own height. When comparing the body size, they are number one highest jumping mammals on the planet.

Grasshopper is blessed by nature to jump 20 times compared to their own body length. From human perspective it is same as a human jumping a length of a full basket ball court.

Kangaroo Rat is able to jump 45 times ahead compared to its on body’s length. This puts them on the top of Longest jumping mammal in relation to their body length.

Froghoppers are able to jump 70 times higher compared to their own body height. They generate the force in relation to their body of about 400 times which is the highest among all mammals. Within a millisecond they can achieve a takeoff velocity of about four meters per second.

Jumping Spider of the spider species is able to jump 20 times higher than its own body’s length. This is same as a human jumping length of two jumbo jets stacked end to end.

Tree Frogs are able to jump 150 times longer compared to their own body’s length. This gives them the title of second longest jumper in animal kingdom in relation to its body length.

The title for the Best Jumper in world goes to “Flea”. In relation to their size, Fleas are able to jump 220 times longer than their body length and 150 times higher than their body height, making them both highest and longest jumping creature. From human perspective it’s like jumping a height of 250 meters while jumping a length of about 400 meters.

Anyone Can Visit This Island Filled With Friendly Wolves