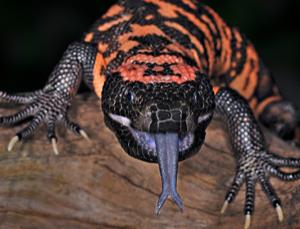 In the animal kingdom, bright, dazzling colors usually mean danger—stay away! Some scientists, though, are willfully ignoring these clear signals for one important reason: Animal venoms and poisons have proven to be invaluable in the development of new medications for conditions like chronic pain, diabetes, and even cancer. This list takes a look at some deadly critters that science is using to help heal the masses.

One species in particular of the Poison Dart Frog, Epipedrobates tricolor, has been useful in creating a non-opioid analgesic. This means that the toxins produced by this particular species of frog have been studied, modified, and synthesized to make a nonaddictive painkiller named “epibatidine” after the frog. Epibatidine was still toxic to rats even at low, therapeutic doses, so the drug was discontinued. Another family of frog, Dendrobatidae, has shown promise in research on appetite suppressants, muscle relaxants, and heart stimulants.

Sea anemones are already beneficial to other animals, but they could also potentially benefit us. Seattle-based biotech company Kineta is currently in a Phase 2 clinical trial for a drug called dalazatide, which is derived from the venom of the sea anemone. This drug is intended for people suffering from autoimmune diseases, like psoriasis and multiple sclerosis, because it is selective in which white blood cells that it blocks.

The only venomous lizard in the United States, the Gila monster is not deadly to humans. Gilamonster’s venomous saliva is actually more helpful to humans than it is harmful. One component of the venom, exendin-4, has become the foundation for a whole new class of medications designed to treat type 2 diabetes.Exendin-4 is also very similar to a human protein, GLP-1, which helps the body regulate how much insulin it produces. The drug created from this protein, Byetta, helps type 2 diabetics maintain healthy glucose levels. It can also lead to weight loss and a decrease in appetite. Byetta is FDA approved and prescribed as a self-administered injection.

The waxy monkey frog secretes a number of proteins through its skin, including the waxy oil that has given the frog its name and allows it to reduce the amount of water lost through its skin. The frog also secretes a hallucinogenic poison which causes tachycardia, vomiting, and hyper-attuned senses. one of the identified proteins, dermorphin, is 40 times more potent than morphine as well as significantly less addictive. In addition to their analgesic properties, these proteins actually have the ability to limit blood vessel growth. It turns out that it is a very good thing in cancer research. After reaching a certain size, most cancerous tumors need blood vessels to get necessary nutrients and oxygen. So controlling the growth and size of the blood vessels supplying tumors could actually allow doctors to starve them to death.

Muscular dystrophy is a genetic disease with no known cure. But thanks to the pet tarantula of a group of researchers, a more effective treatment might not be far off. Rosie is the name of the Chilean rose tarantula that the researchers kept as their mascot, which ultimately led them to their amazing discovery. Grammostola spatulata’s venom contains a protein called GsMTx4. Through their research, the group found that this protein can stop the body from destroying its own muscle mass by cutting off certain pathways to the affected cells. This treatment is somewhat revolutionary because it is not a genetic therapy. It treats the symptoms of the disease, not the cause.

Under UV light, all scorpions glow in the dark. One particular scorpion, however, is helpful for cancer treatment. Commonly known as the deathstalker scorpion, Leiurus quinquestriatus is being studied for the chlorotoxin found in its venom. This toxin is unique because it attaches itself only to cancerous cells, leaving healthy ones alone. As chlorotoxin only binds to cancerous cells, it can be used to make tumors more visible. This makes tumors much easier to see for surgeons, who essentially “go in blind” when operating. This method works better than the 2-D printed MRI image that is most commonly used. The “tumor paint” method has been used successfully in a handful of surgeries already and is slated for more tests and trials.

For people with chronic pain, like those suffering from arthritis or cancer, opioids can be helpful. Cancer pain is particularly caused by a tumor pressing against sensitive nerves. If it is not removed, the tumor continues to press, making the pain chronic. Puffer fish contain a deadly neurotoxin called tetrodotoxin (TTX) that is responsible for a handful of deaths every year. TTX is a paralytic, meaning that it attacks nerve tissue and eventually renders the victim paralyzed.

TTX is nonaddictive, so those suffering from chronic pain can take it without worrying about relying on it for the rest of their lives.

Under the name Tectin, TTX is currently in Phase 3 trials, the final step before the drug can be submitted for FDA approval.

Brazilian pit vipers kill their prey with a specific compound in their venom. This compound makes the prey’s blood pressure drop quickly to an extremely low level, causing the prey to black out. The compound is an ACE inhibitor. In small enough doses, it increases the diameter of the blood vessels, reducing blood pressure.

The Brazilian pit viper’s venom and the discoveries surrounding it allowed commercial drugs such as captopril to be produced and prescribed to patients suffering from hypertension.

The Brazilian wandering spider boasts a leg span of up to 13 centimeters. In males, the spider’s venom can trigger a four-hour erection that can ultimately lead to death. Scientists are studying the spider’s venom to help treat erectile dysfunction, especially in those who are resistant to Viagra.

Harrowing Stories of Man Against Animal